Norwegian belongs to the East Scandinavian group of the Germanic branch of the Indo-European language family (Ethnologue). It is closely related to Swedish and Danish. The three languages developed from Old Norse which was spoken in the areas of 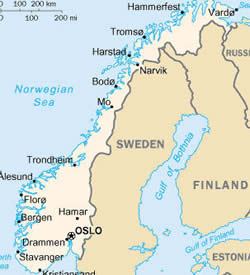 Norwegian is the official language of Norway, where it is spoken by 4,640,000 people (Ethnologue). It is also spoken in the U.S., Canada, and Sweden. There are 4,741,780 speakers of Norwegian worldwide.

Norwegian has two official standardized spoken and written varieties. The two varieties are used in public administration, religious services, and in the media. Newspapers, magazines and books are published in both varieties that have undergone a number of reforms throughout the 20th century. A movement to merge them into one standard was not successful.

Bokmål and Nynorsk differ from each other in many instances as far as their grammar, vocabulary, and pronunciation are concerned. Both written varieties are not correated with either geography or the with the spoken dialects.

In addition, Norwegian has many local dialects which are usually divided into four major groups:

Bokmål has an inventory of nine long and nine short vowels with some variation among the dialects. Vowel length makes a difference in word meaning, e.g., tak with a long [a] means ‘roof’, while takk with a short [a] means ‘thank you’. In addition, there are three diphthongs /oi/, /ei/, /au/. In the table below length is indicated by a colon after the vowel. Rounded vowels are produced with protruded lips.

The consonant system of Norwegian differs considerably from dialect to dialect. Voiced consonants become voiceless at the end of words, e.g., tag ‘day’ is pronounced as [tak].

Stress in native Norwegian words normally falls on the first syllable. Loanwords may have other stress patterns.

In most forms of Norwegian and Swedish, pitch differences are regularly associated with primary stress. The difference is significant in polysyllabic words. There are significant variations in pitch accent among dialects, and some varieties of Norwegian have by now lost the tonal accent opposition altogether.

Norwegian grammar is similar to the grammar of other Germanic languages. However, due to the lack of a single standard, rules vary from one dialect area to another.

Gender and number are conflated into one ending.

The verb system of Norwegian has the following basic characteristics:

The normal word order in declarative sentences is Subject-Verb-Object. In questions, the order is Verb-Subject-Object.

Most Norwegian words are of common Germanic stock, supplemented by borrowings. Norwegian has borrowed from German (particularly Low German), French, and English. Much of the scientific terminology has Greek and Latin roots. Words are frequently formed by compounding native elements, e.g., verdemserkæringene ‘universal declaration’. This, as you can see, can result in very long words.

The oldest records of Norwegian are runic (Futhark) inscriptions dating back to the 9th century. Around 1030, Christianity came to Norway, bringing with it the Latin alphabet. Norwegian manuscripts in the new alphabet began to appear about a century later.

Norwegian uses the standard 26 letters of the Latin alphabet, plus three additional vowels æ, ø, å which are listed at the end of the alphabet. The letters c, q, w, x and z are used almost exclusively in borrowings and foreign names. There are 9 vowel and 20 consonant symbols. The same alphabet is used for writing Danish.

Take a look at the text of Article 1 of the Universal Declaration of Human Rights in Bokmål and Nynorsk.

English has borrowed some words from Norwegian. Below are a few of them.