Germanic languages are spoken by close to 470 million people in many parts of the world, but mainly in Europe and the Western Hemisphere. All modern Germanic languages derive from a common ancestor traditionally referred to as *Proto-Germanic, believed to have broken off from other *Proto-Indo-European languages some time before 500 B.C. Although no written documents in Proto-Germanic have survived, the language has been substantially reconstructed by using the oldest existing records. Compared to *Proto-Indo-European, **Proto-Germanic had a relatively simpler nominal morphology. For instance, it dropped the dual number, and reduced the number of cases from eight to four. On the other hand, the verbal morphology of *Proto-Indo-European survived relatively intact in all modern Germanic languages, although there are fewer strong (irregular) verbs today.

They are usually divided into two groups. 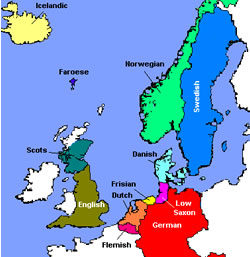 Norse is another name for the North Germanic, or Scandinavian group of languages. These languages all stem from an earlier, now extinct, language known as Old Norse that was spoken by the Germanic tribes living in Scandinavia before 1000 A.D. Today, the differences among the dialects within Norway, Sweden, and Denmark are often greater than the differences across their borders, but the political independence of these countries leads them to be classified as separate languages.

Click on the MLA Interactive Language Map to find out where Scandinavian languages are spoken in the U.S.

All Germanic languages have undergone some common sound changes:

Most modern Germanic languages have a large inventory of vowel phonemes consisting of 14-16 vowels. Vowel length typically distinguishes word meaning, and there is a contrast between rounded and unrounded front vowels in many of the Germanic languages.

All Germanic languages are characterized by a shift of stress to the root and later to the first syllable of the word. Though English has an irregular stress pattern, native words always have a fixed stress, regardless of what is added to them. In addition, some Germanic languages have a pitch accent, e.g.,Norwegian and Swedish).

All Germanic languages are synthetic, i.e., they add suffixes to roots and stems to express grammatical relations. However, they differ from each other in how conservative or how progressive each language is with respect to preserving the inflectional system of *Proto-Germanic. For instance, German, Dutch and Icelandic, have preserved much of the complex inflectional morphology of inherited from *Proto-Germanic. Others, like English, Swedish, Yiddish, and Afrikaans have lost most of the inflections.

Some of the general features of Germanic nouns are listed below.

Below are some general features of Germanic verbs.

Word order is best described in terms of the position of the verb in Germanic clauses. It occupies final position in subordinate clauses, and first or second position in main clauses. The position of all other sentence constituents is relatively free. This feature is shared by all Germanic languages, except English, which has a Subject-Verb-Object word order.

Most words in Germanic languages are derived from *Proto-Germanic. Germanic languages have also borrowed from neighboring languages, and especially from Latin and Greek, as well as from each other. Much of its scientific terminology has Greek and Latin roots. The latest source of loanwords is English. Words are frequently formed by compounding, suffixation and prefixation, e.g., German Weihnachtsmann (literally ”Holy Night Man,’ i.e., ‘Santa Claus’), English antiestablishmentarianism.

Below are some common expressions in various Germanic languages, showing the similarities and differences among them.

Below are the numerals 1-10 in major Germanic languages.

The earliest evidence of Germanic writing comes from names recorded in the 1st century by Tacitus. From roughly the 2nd century AD, certain speakers of early Germanic dialects developed the Elder Futhark, an early form of the runic alphabet, some examples of which go back to the 3rd century AD. It is thought that the runes were based on an Etruscan-related alphabet, adapted to represent the sounds of Germanic languages and styled to allow carving on wood, stone, and metal. Each rune not only represents a sound but also has a special meaning frequently connected with Norse mythology. For instance, the image on the left, called Ansuz, was most often associated with Odin, the chief god of Norse mythology, the Viking equivalent of Zeus, the god of sky and thunder in Greek mythology.

Early runic inscriptions were largely limited to personal names, and difficult to interpret. Later, Christian priests and monks who spoke and read Latin in addition to their native Germanic dialects began writing the Germanic languages with slightly modified Latin letters. However, throughout the Viking Age, runic alphabets remained in common use in Scandinavia.

Click here to see your name written in runes and to learn more about this ancient writing system.

Below is Article 1 of the Universal Declaration of Human Rights in several major Germanic languages.