Spanish (español, castellano) belongs to the Romance branch of the Indo-European language family. Like all Romance languages, Spanish developed from Vulgar Latin in an area of the Iberian peninsula that is now Spain, and was brought to the Americas, the Philippines, and parts of Oceania by the Spanish colonization in the 16th century. It is spoken as a first language in 30 countries world-wide by about over 399 million and as a second language by some 89.5 million people (Ethnologue). Mexico has the largest population of Spanish first-language speakers in the world (103 million). The four next largest Spanish-speaking populations reside in Colombia (41 million), Spain (38.6 million), Argentina (38.8 million) and U.S. (34.2 million based on 2010 census). It is the fourth most spoken language in the world after Chinese, Hindi, and English. 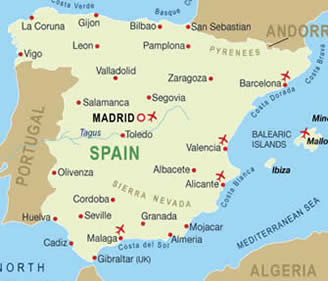 Spanish is the official (or national) language of Argentina, Bolivia (with Quechua and Aymara), Chile, Colombia, Costa Rica, Cuba, Dominican Republic, Ecuador, El Salvador, Equatorial Guinea (with French), Guatemala, Honduras, Mexico, Nicaragua, Panama, Paraguay (with Guarani), Peru (with Quechua and Aymara), Puerto Rico (with English), Spain (co-official in some regions with Catalan, Galician and Basque), Uruguay, Venezuela. In the United States, Spanish is the most studied foreign language in schools and universities. Spanish has co-official status in the state of New Mexico, and in Puerto Rico. It is is one of the six official working languages of the United Nations and one of twenty-three official languages of the European Union.

Click here on the MLA Interactive Language Map to see where Spanish is spoken in the U.S.

Since Spanish is spoken by so many people in so many countries it is not surprising that it has developed a number of different dialects. The classic division is usually made between Spanish from Spain, or Castilian Spanish, and Spanish from Latin America. Within each division there are variations involving pronunciation, grammar, vocabulary, and intonation. Despite many regional differences, speakers of Spanish from different countries can understand each other without much difficulty. Examples of differences are given below.

The sound system of Spanish is relatively uncomplicated.

Spanish has five vowel phonemes, i.e., sounds that make a difference in word meaning. In addition, Spanish has several diphthongs, such as /ui/ as in muy ‘very.’

Spanish has 19-20 consonant phonemes, i.e., sounds that differentiate word meaning. The chart below is based on Iberian Spanish. There are dialectal differences.

Spanish vocabulary is Latin-based with a large number of borrowings from Arabic, and more recently from English. Spain’s Arabic connection goes back to the invasion of Spain by Arabic-speaking Moors in 711 AD. Spanish and Arabic coexisted side by side until the Moors were expelled in the 15th century AD. By then thousands of Arabic words had become part of Spanish. Many of them start with al-, the definite article in Arabic. Many Spanish place names can be traced to Arabic, e.g., Alhambra from Arabic al-hamrâ ‘the red (castle)’. You will recognize some of these words as they are very similar to English words. Below are a few examples of such words:

Latin American Spanish has also borrowed words from the Indian languages of Central and South America. English, in turn, borrowed these words from Spanish.

Below are some common words and phrases in Spanish.

It must be noted that there are some differences in vocabulary among the Spanish-speaking countries. For instance, the word for bus in Spain is autobús, but in Puerto Rico it is guagua. However, the word guagua in Chile means ‘baby’. In some Latin American countries the word for avocado is aguacate, while in others it is palta.

Below are the numerals 1-10 in Spanish.

Written Spanish first appeared in notes and glosses in Latin religious texts in the 11th century. In the 12th century, law codes were translated into Spanish. The 13th century gave rise to Spanish prose. The first Spanish grammar and dictionaries were published in the 15th-16th centuries.

Spanish is written with the Latin alphabet that includes one extra letter Ñ ñ. It is given below.

Take a look at Article 1 of the Universal Declaration of Human Rights in Spanish.

English has borrowed many words from Spanish. Below are just a few of them.

How difficult is it to learn Spanish?
Spanish is considered to be a Category I language in terms of difficulty for speakers of English.