Wi mwega? How are you?

Gikuyu (Kikuyu, Agĩkũyũ )belongs to the Bantu branch of the Niger-Congo language family. It is a growing language spoken as a first language by 6.6 million people in Kenya in an area between Nairobi and Mount Kenya (Ethnologue). In recent years, the language has spread into other parts of southern Kenya, so that today Gikuyu speakers constitute one of the largest linguistic groups of Kenya, with the exception of English. 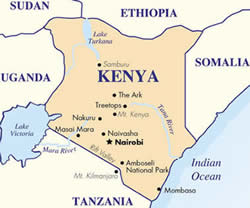 Although Gikuyu does not have an official status in Kenya where (the official languages are English and Swahili), it is, nevertheless, plays an important role being spoken as a first language language by the Gikuyu people and one that is also being learned as a second or third language by non-Gikuyu. This is particularly true in urban areas such as Nairobi, East Africa’s largest city and in the surrounding areas of central Kenya. Gikuyu is taught in primary schools and used in news media, radio programs, TV, videos, and cinema.

According to Ethnologue, there are 5 major dialects of Gikuyu:

The sound system of Gikuyu has many features in common with other Bantu languages. It is particularly distinguished by prenasalized consonant phonemes and tones.

Gikuyu has seven vowel phonemes, i.e., sounds that make a difference in word meaning. Vowels can be long or short. Their length differentiates the meaning of words. In writing, long vowels are represented by double letters, e.g., aa represents long /a/. Vowels can also be nasalized. Nasalization is represented by a tilde. In the table below, their orthographic representations are given in parentheses in red.

Gikuyu has eighteen consonant phonemes. A distinguishing feature is the presence of prenasalized consonant phonemes, i.e., sequences of nasal plus another consonant that behave like a single sound unit. In the table below, the orthographic representations of the phonemes are given in red.

Gikuyu shares many grammatical features with other Bantu languages, namely a high degree of agglutination, i.e., the adding of affixes to a base form in nominal and verbal forms.

Gikuyu verbs consist of a root that may be extended by adding various suffixes. Final modal suffixes mark the indicative and subjunctive.

One of the suffixes is a subject marker, referring to and agreeing with the subject of the clause.

The normal word order in Gikuyu is Subject-Verb-Object. However, topicalization is possible, so that the emphasized constituent precedes all other constituents in a sentence.

Below are a few Gikuyu words and phrases.

Below are Gikuyu numerals 1-10.

In addition to a rich oral literature, Gikuyu has an older and more extensive written literature than any other East African language, with the exception of Swahili. A good deal of the Gikuyu literature is political, but there is also fiction by authors such as Ngũgĩ wa Thiong’o.Today, Gikuyu is written in the African reference alphabet, first proposed by a UNESCO-organized conference in 1978. It is a version of the Latin alphabet adapted to represent Gikuyu sounds. Nasal vowels are marked with a tilde. Although Gikuyu is a tonal language, tones are not represented in its orthography which can lead to confusions because two words with different meanings can be spelled in the same way.

The current Gikuyu alphabet is given below.

Below are the first two sentences from John 1:1 in Gikuyu.

How difficult is it to learn Gikuyu?
There is no data on the difficulty of Gikuyu for speakers of English.