Swahili, or Kiswahili, belongs to the larger Benue-Congo branch of the Niger-Congo language family. The name comes from the plural of the Arabic word sawāhil ‘coast’. ‘Ki-‘ is a prefix attached to nouns of the noun class that includes languages. Swahili is spoken in East Africa by different people along the coast from Somalia to Mozambique. It serves as a lingua franca for most of East Africa. 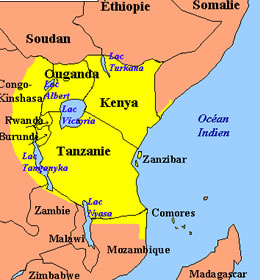 The status of Swahili as an international language results from its strategic location on the coast of East Africa. The Swahili-speaking populations on the East African coast served as intermediaries between the Bantu-speaking peoples in the interior of Africa and the traders on the coast who came from South Asia and Arabia. The use of Swahili spread with the growth of commerce during the colonial period in the 19th-20th centuries. British control of important Swahili-speaking areas of Kenya and Tanzania resulted in the development of an international standard Swahili that was based on the educated speech of the island of Zanzibar.

Swahili is spoken by 15.5 million people as a first or as a second language (Ethnologue). Along with English, it is the official language of Tanzania, Kenya, and Uganda, and is the only African language of the African Union. Swahili is also spoken in Burundi, Malawi, Mozambique, Rwanda, Somalia, South Africa, Uganda, United Arab Emirates, and the U.S. (Ethnologue). Most speakers of Swahili use it as a language of wider communication in addition to their home language or languages spoken in their immediate communities. While English still plays an important role in post-colonial East Africa today, Swahili is becoming more important in politics, commerce, culture, education, and mass media. Its growth is most notable in the working class population of East African urban centers Notably, Swahili is the only African language among the official working languages of the African Union.

Swahili has a relatively large number of mostly mutually intelligible varieties that are listed below (Ethnologue). This can be explained by the fact that it is spoken in many different countries.

The sound system of Swahili shares a number of features with other Niger-Congo languages. It has 5 vowel and 36 consonant phonemes. The language has a simple syllable structure with syllables typically ending in a vowel with no consonant clusters and no final consonants. A vowel is added to loanwords that end in a consonant, e.g., English bank becomes benki in Swahili.

Swahili has five vowel phonemes, i.e., sounds that can serve to differentiate word meaning. There are no diphthongs. Vowel sequences are permitted.

Stress in Swahili words normally falls on the penultimate (one before last) syllable. Unlike other Bantu languages, Swahili does not have tones.

Swahili is an agglutinative language, i.e., grammatical functions are expressed by adding prefixes and suffixes to roots.

Swahili verbs consist of a root plus prefixes that represent various verbal categories such as person and tense. Verb complexes subsume subject pronouns which are incorporated into the verb.

The bulk of Swahili vocabulary is Bantu in origin. In addition, many Swahili words are borrowings from Arabic and Persian as a result of contact with Arab and Persian traders. The language has also borrowed extensively from Portuguese and German during the colonial period, and most recently from English.

Below are some common words and phrases in Swahili.

Below are Swahili numerals 1-10.

Swahili has a long literary tradition dating back to the middle of the 17th century. The oldest surviving documents written in Swahili date back to the early part of the 18th century. They were transcriptions of oral Swahili epic poetry written in the Arabic script, the result of of Islamic influence on the culture of East Africa. Many works of Western writers have been translated into Swahili. The most famous contemporary Swahili author is Shaaban Robert, a Tanzanian writer known for his novels. Swahili was originally written in the Arabic script that was replaced by a Roman-based alphabet in the mid-19th century. The alphabet was standardized in the 1930s.

Take a look at Article 1 of the Universal Declaration of Human Rights in Swahili.

English has borrowed a few words and phrases from Swahili, several of them familiar from movies and TV. Some words were popularized by Walt Disney’s “Lion King.”

How difficult is it to learn Swahili?
Swahili is considered to be intermediate in difficulty for English speakers, somewhere between Category I and Category II.