Latin (lingua latina) is a member of the Italic branch of the Indo-European language family. Italic speakers were not native to Italy. They migrated to the Italian Peninsula in the 2nd millennium BC. Before their arrival, Italy was populated by Etruscans, a non-Indo-European-speaking people, in the north, and by Greeks in the south. Latin developed in west-central Italy in an area along the River Tiber known as Latium, which became the birthplace of the Roman civilization. As Rome extended its political power over the Italian Peninsula, Latin become dominant over the other Italic languages, such as Oscan and Umbrian which ceased to be spoken sometime in the 1st century AD. 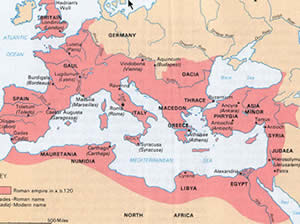 The expansion of the Roman Empire also spread Latin throughout the territories occupied by the Romans who spoke Vulgar Latin, a colloquial variety of the language spoken by Roman citizens. Vulgar Latin was a language of wider communication but it was not a standardized written language like Classical Latin, a standardized form of the language used for all written communication. Vulgar Latin varied across the territories occupied by the Romans, depending on a variety of factors, including the influence of local languages. As the Roman Empire disintegrated and communication with Rome declined, regional forms of Vulgar Latin diverged more and more from the classical norms in structure, vocabulary, and pronunciation. They became less and less mutually intelligible, and by the 9th century developed into separate Romance languages, as we know them today.

As Vulgar Latin continued to evolve, Classical Latin continued mostly unchanged in somewhat standardized form throughout the Middle Ages as the written language of religion and scholarship. As such, it has had a profound effect on all Western European languages.

Even though it is no longer spoken today, Latin has exerted a major influence on many living languages, serving as the lingua franca of the Western world for over a thousand years. Most modern Western Indo-European languages have directly or indirectly borrowed words from Latin, which still has limited use in academia, medicine, science, and law. The study of Classical Latin language and literature is part of the curriculum in schools and universities in many countries. The works of Roman writers and poets, such as Ovid and Virgil are widely studied throughout the world.

The Catholic Church used Latin as its primary liturgical language until the Second Vatican Council (1962-1965) after which it was largely replaced by the local spoken languages of the parishioners. However, Ecclesiastical Latin, also known as Church Latin, is used in documents of the Roman Catholic Church and in its Latin liturgies. Ecclesiastical Latin does not differ greatly from Classical Latin.

No data exists on different dialects of Latin as it was spoken.

Latin has a fairly uncomplicated system of consonants.

Latin grammar has retained many features of Proto-Indo-European, particularly in its noun declensions.

Nominal inflections are fusional, i.e., one ending represents a fusion of case, number, and gender. Latin nouns are characterized by the following:

The normal word order in Latin is Subject-Object-Verb. However, other word orders are used to mark sentence topic and for emphasis because inflections clearly indicate the role of words in sentences.

Latin vocabulary is mostly Italic in origin, however, some frequent Latin words have no Italic etymology, e.g., mulier ‘woman’, bonus ‘good’. Latin shares only between 25%-35% percent of its basic vocabulary with such languages as Gothic, Vedic Sanskrit, old Irish, and Old Armenian, showing that there was a long period of separation between Latin and the rest of these classical languages.

Blow are a few basic words and phrases in Latin.

Below are Latin numerals 1-10.

The true developers of the Latin alphabet were the Etruscans who dominated the Italian peninsula in pre-Roman times. They adapted the early Greek alphabet for writing their language. The Romans took over the Etruscan alphabet for writing their own language. They originally took 21 of the Greek and Etruscan letters to represent the sounds of their own languages.

Most of the people conquered by Rome had unwritten languages. With the spread of Christianity into the areas where these languages were spoken, came the need to translate the Bible into the local vernaculars. This, in turn, required the adaptation of the Roman alphabet to represent these languages.

There are two different versions of Latin orthography, one for Classical Latin and another for Ecclesiastical Latin. The latter is based on the medieval standard pronunciation of Latin by Italian speakers, as preserved by the Catholic Church.

Take a look at the text of Article 1 of the Universal Declaration of Human Rights in Latin.

Many English words and word parts can be traced back to Latin. A full list may run into tens of thousands. Below are just a few examples of Latin influence on English vocabulary.

How difficult is it to learn Latin?
There is no data on the difficulty of Latin for speakers of English.