Oriya, also known as Odisha, a member of the Indo-Aryan branch of the Indo-European language family. It is spoken as a first language by 32.1 million people most of whom live in the Indian state of Odisha, although there are also 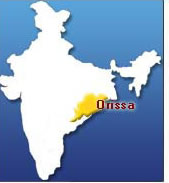 Oriya is thought to have descended from a Prakrit spoken in Eastern India over 1,500 years ago. Of all the languages spoken in Northern India, Oriya shows the least influence of Persian and Arabic. However, it shows significant Buddhist and Jain influences.

Oriya is one of the 22 official languages and 14 regional languages of India. It is a statutory provincial language in Odisha State, serving as the medium of everyday communication, as well as being used in education, government, business and in the media.

(Ethnologue) identifies a number of regional varieties of Oriya:

The sound system of Oriya shares many features with other Indo-Aryan languages.

Oriya has 6 vowel phonemes, i.e., sounds that make a difference in word meaning.

Like all Indo–Aryan languages, Oriya has a rich system of consonants. Consonant clusters are permitted mostly in medial and final positions. Initial clusters are rare and mostly consist of a consonant + /r/.

Stress in Oriya generally falls on the penultimate syllable of a word.

The grammar of Oriya is very much like that of other Indo-Aryan languages. Like all these languages, Oriya is agglutinative, i.e., it adds suffixes to roots to build words and to express grammatical relations.

Oriya nouns are marked for the following grammatical categories:

Most of Oriya’s vocabulary derives from Sanskrit. The language also has loanwords from Persian, Arabic and from the Austronesian languages spoken by the inhabitants of the ancient Kalinga empire whose territory comprised most of the state of Odisha and parts of the neighboring state of Andhra Pradesh.

Here are some common phrases and words in Oriya.

Below are Oriya numerals 1-10 in Romanization.

Below are the numerals 0-9 in Oriya script.

Oriya has a strong literary heritage dating back to the 13th century. Oriya script is an abugida written from left to right. Abugida is a type of writing system in which each character represents a consonant followed by a specific vowel. Other vowels are represented by a modification of the consonant symbol. Oriya script developed from the Brahmi script. It is thought that the rounded shapes of the Oriya characters resulted from twriting on palm fronds with a sharp stylus. Straight lines and sharp angles would have torn the fronds.

Below is a sample of Oriya script representing the equivalent of the phrase Universal Declaration of Human Rights.

Do you know some English words that were borrowed from Oriya? Let us know and we’ll add them here!

How difficult is it to learn Oriya?
There is no data on the difficulty of Oriya for speakers of English.