Rwanda, also called Kinyarwanda, Rwanda or Ruanda, is a Bantoid language that belongs to the Benue-Congo branch of the Niger-Congo language family. It is spoken by 6.5 million people in the Republic of Rwanda by over 90% of the country’s population. It is also spoken by 25,000 people in the Democratic Republic of the Congo 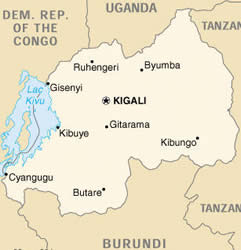 and by 450,000 people in Burundi and southern Uganda, where it is known as Fumbira. The total number of Rwanda speakers is estimated at 7.3 million people (Ethnologue). The language is intelligible with Rundi (Kirundi), spoken in Burundi and Tanzania.

Rwanda is one of the official languages of the Republic of Rwanda, along with English and French. Unlike most other African countries with a multitude of languages, Rwanda has only these three languages. As a result, all Rwandans speak Rwanda, the language of primary education. Above the primary level, instruction is either in English or in French.

Ethnologue identifies a number of dialects of Rwanda. They are reportedly very similar to each other.

The sound system of Rwanda shares many features with other Bantu languages, such as the presence of prenasalized consonants and the use of tones.

Rwanda has five vowel phonemes, i.e., sounds that make a difference in word meaning. They are given below.

Rwanda has 24 consonant phonemes presented in the table below. Their orthographic representations are given in parentheses.

Tones play an important role in Rwanda, as they do in many other Niger-Congo languages. They are used to distinguish between otherwise identical words and to mark grammatical functions.

The grammar of Rwanda shares many features with other Bantu languages.

The normal word order in Rwanda is Subject-Verb-Object.

Rwanda has borrowed many words from English, French, and Swahili.

Here are some common Rwanda words and phrases.

Below are Rwanda numerals 1-10.

Rwanda has been written with a standardized orthography since the 1940s.

Take a look at Article 1 of the Universal Declaration of Human Rights in Rwanda.

How difficult is it to learn Kinyarwanda?
There is no data on the difficulty of rwanda for speakers of English.