Armenian (հայերեն, Hayaren) belongs to the Indo-Eu-ropean language family. It forms its own independent branch and has no close relatives. It is generally thought to be most closely related to Greek. 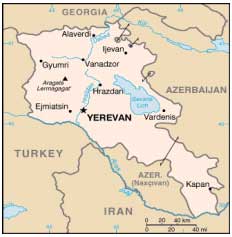 The Armenian diaspora resulted from several historical events. During World War I, Armenians in Turkey suffered from ethnic cleansing and genocide (1915-1916). From 1918 to 1920, those who resisted the Turks, attempted to create an independent Armenian Republic, but their efforts failed. Armenia was then divided among the USSR, Turkey, and Iran. This resulted in mass emigration of Armenians to different parts of the world.

The term Armenian can be used to refer to at two major varieties of the language, each with its own dialects. Armenian has two standard varieties: Eastern and Western.

Eastern Armenian has been influenced by two sets of Russian-led reforms. As a result, it differs orthographically from Western Armenian. There are also phonological differences between the two major dialects. Within each major dialect, there are also many regional variations. Some local dialects are so different from both standard forms of the language that speakers of the standard forms of Armenian have difficulty in understanding local dialects.

The sound system of Armenian is rich in consonants and consonant clusters.

Armenian is a highly inflected language with an complex system of noun declensions and verb conjugations.

The endings of Armenian verbs vary from dialect to dialect. The following is an outline of the main verbal categories:

Word order in Armenian is typically Subject-Verb-Object. But other orders can also occur since cases clearly mark the role of words in sentences.

Here are a few common words and phrases in Eastern Armenian (in transliteration).

Below are the numbers 1-10 in Eastern and Western Armenian (in transliteration).

The Armenian alphabet was invented by the missionary Mesrob Mashtots around 406 AD. Originally, it consisted of thirty-six letters representing six vowels and thirty consonants. Two letters for representing were added in the 12th century to write loanwords. Armenian is written horizontally from left to right. There are some differences in the sound values of the letters between Eastern and Western Armenian.
Take a look at the text of Article 1 of the Universal Declaration of Human Rights in Armenian script and in transliteration.