Haitian Creole (Kreyòl ayisyen) is spoken in Haiti by all of its 7 million people. It is also spoken in the Bahamas, Canada, Cayman Islands, Dominican Republic, France, French Guiana, Guadeloupe, Puerto Rico, and the U.S. (Ethnologue). It is based on French and on the African languages spoken by slaves brought from West Africa to work on plantations. It is often incorrectly described as a French dialect or as “broken French”. In fact, it is a language in its own right with its own pronunciation, grammar, vocabulary, and pragmatics. 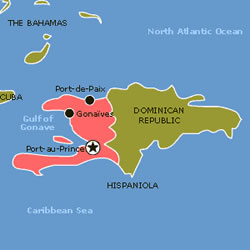 with French, it continues to enjoy less prestige than French. Even after Haiti became independent from France in 1804, French continued to be the prestige language of government and of power. Not surprisingly, French is more likely to be spoken by the urban elite which constitutes about 8-10% of Haiti’s population. In addition, urban French-based schools have been privileged over rural Kreyòl-based schools.

Print media in Kreyòl has been hampered by regional and social variations in the language and orthography. Newspapers are beyond the reach of many citizens due to language differences, illiteracy, and cost. There are only a few television stations that broadcast in Kreyòl. Radio is the most important medium of communication providing a way for Haitians to stay informed. In the large expatriate Haitian communities of New York, Miami, and Boston, Kreyòl is the subject of instruction and is also used to teach subject matter in elementary and secondary schools.

Kreyòl has three main geographical dialects, and it is not uncommon for Haitians to speak more than one of them:

In addition, there are a continuum of social variations with Kreyòl at the extreme that is closest to French and popular speech that is farthest from it. This is illustrated in the two versions of Article 1 of the Universal Declaration of Human Rights.

Linguists do not agree on a single description of the sound system of Kreyòl because of regional and social differences in pronunciation. The speech of urban dwellers in Port-au-Prince, the capital of Haiti, especially those who know French, tends to be more similar to French than the speech of rural speakers.

Kreyòl grammar differs significantly from that of French.

Pronouns are marked for person and number. There is no difference between personal, direct and indirect, and possessive pronouns. Some are of French origin, others are not.

These pronouns can be contracted, e.g., Machte yon liv ‘I bought a book’.

There is no subject-verb agreement and there are no verb tenses per se. Instead, Kreyòl uses a system of markers which precede the verb, to indicate tense. For example, the particle te indicates past tense, ap indicates progressive, and pral(e) indicates future. The present tense is not marked.

Most of Kreyòl vocabulary is derived from French. Kreyòl has also many borrowed words from English, Spanish, and from Niger-Congo languages such as Wolof, Fon, and Éwé. French articles and even prepositions are sometimes incorporated into Kreyòl nouns.

Below are a few basic sentences in Kreyòl:

Below are Kreyòl numerals 1-10.

Attempts to write Kreyòl date back to the 18th century, but because of its low status in Haiti little has been written in it, and French remained the language of literacy. There were several competing orthographies, all based on the orthographic traditions of French that did not accurately represent the sound system of Kreyòl. The first writing system independent of French was developed in the 1940s. It was based on the International Phonetic Alphabet. In the 1950s, the system was modified to include changes that brought Kreyòl orthography closer to that of French. This modified orthography was used until 1975 when a new orthography that combined the two systems was developed. It employs a consistent one sound — one symbol correspondence. This spelling system was formally approved by the Haitian government in 1979. Today, most Haitian language materials are written using this orthography.

Take a look at Article 1 of the Universal Declaration of Human Rights in Kreyòl and in French.

Despite recent efforts to increase the literacy rate in Kreyòl, progress has been slow. Although experts agree that it is easier to become literate in one’s first language, many Haitians do not see the value of becoming literate in Kreyòl. In addition, there is a lack of textbooks in Kreyòl and of teachers willing to teach Kreyòl literacy, although the situation has been improving.

Haiti has produced well-known writers and poets who wrote exclusively in French. However, with the recognition of Kreyòl as an official language, novels, poems, and plays are being written in it. In 1975, Franketienne wrote Dezafi, the first novel written entirely in Kreyòl.

English has borrowed a few words from Kreyòl. Most of these words have to do with the religious traditions of Haiti.