The Khoisan (Khoesan) language family is the smallest of the language families of Africa. The name Khoisan derives from the name of the Khoe-Khoe (also known as the Hottentot) group of South Africa and the San (Bushmen) group of Namibia. Archaeological evidence suggests that the Khoisan people appeared in southern Africa some 60,000 years ago. Thus, the Khoisan languages may well be among the most ancient of all human tongues. These languages were used by several ethnic groups who originally inhabited southern Africa before the Bantu migrations southward and later European colonization in the 18th, 19th, and 20th centuries which led to the eventual decline of most and the death of some of these ancient languages. Even though the Khoisan languages show similarities in their sound systems, their grammatical systems are quite unique. In the absence of historical records, it is difficult to determine their genetic relationship to each other and to other African languages. It is fair to 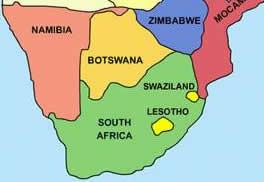 say that of all the language families of the world, the Khoisan languages are among the least studied.

The most distinctive linguistic characteristic of Khoisan languages is the use of click consonants, which have been adopted by a number of neighboring Bantu languages, such as Xhosa and Zulu in South Africa.

Today, the Khoisan languages are spoken only in southwestern Africa, in the region around the Kalahari Desert extending from Angola to South Africa, and in one small area of Tanzania. The Hadza and Sandawe languages in Tanzania are generally classified as belonging to the Khoisan language family, but they are extremely distant geographically and linguistically from the other Khoisan languages.

Some scholars divide Khoisan languages into three groups consisting of mutually intelligible languages. There is little intelligibility between the North and the South Khoisan groups.

Of all the Khoisan languages, only Nama enjoys official recognition. It is a national of Namibia, along with English and a number of other regional languages. Nama is used in education and in the media.

The Khoisan languages are becoming increasingly endangered. Few of them have more than 1,000 speakers, and the number of speakers is fast diminishing. Several are known to have become extinct. Unfortunately, many of these languages have left behind no written records, so their loss is permanent. One of the main reasons is that bilingual Khoisan speakers shift to the dominant language of the area and stop teaching the language to their children. There are some exceptions, for instance, the Sandawe language in Tanzania whose speakers have maintained a relatively stable linguistic community.

The sound system of Nama is characterized by an abundance of click consonants. The origin of clicks remain a mystery, even though some scholars speculate that they might represent an earlier stage in the evolution of human language. According to this hypothesis, clicks might have originally served as onomatopoetic imitations of naturally occurring sounds. However, there is no scientific proof to support this hypothesis since all languages use sound symbolism to a lesser or greater extent.

The Khoisan languages share some similarities in their extremely complex sound systems. All click and most non-click consonants appear at the beginning of words and are followed by a vowel. Only a few consonants, such as /b/, /m/, /n/, /r/, and /l/ can appear between vowels, and even fewer can appear at the end of words.

Many of the Khoisan languages have five vowel phonemes /i/, /e/, /a/, /o/, /u/ which can be produced with additional features, such as nasalization, pharyngealization, and different voice qualities such as breathy and creaky voice, sometimes resulting in up to 40 different vowels.

In addition to click consonants, the Khoisan languages use a large number of other consonants, up to a total of 90 consonants in ǀGwi.

Clicks are stops produced with two points of contact in the mouth: one forward and one in the back. The pocket of air produced by the resulting enclosure is rarefied by the sucking action of the tongue. Release of the forward closure results in a pop-like sound. There are several places of articulation at which click consonants occur, as presented in the table below. Click consonants can be modified in a variety of ways. For instance, they can be aspirated, nasalized and glottalized. The Khoisan languages differ in the number of such modifications from a low of 20 in Nama to a high of 83 in Kxoe. Southern Khoisan languages have a very high ratio of words containing clicks as compared to those that do not contain them.

The grammatical systems of Khoisan languages differ considerably, not just between the branches, but also within the branches themselves.

A grammatical feature common to many of the Khoisan languages is the use of verb compounds, e.g., the equivalent of English enter would be something likego+enter.

The usual word order is either Subject-Verb-Object, or Subject-Object-Verb, depending on the language.

The vocabulary of Khoisan languages is a reflection of their life-styles. Since the speakers of these languages live in close contact with nature, they have a very refined vocabulary related to hunting, animals, plants, and various types of terrain.

Most of the languages are unwritten, but Nama and Naro have Latin-based orthographies. Nama, in particular, has a long tradition of literacy.