Sindhi belongs to Northwestern group of the Indo-Aryan branch of the Indo-European language family. There are different estimates of the number of speakers of Sindhi. Ethnologue estimate, based on 2001 census, puts the number of speakers at 21.3 million, whereas Wikipedia puts the number at some 42 million. Of these 35 million live in the Sindh province of Pakistan, and 5 million in the states of Gujarat, Rajastan, and Maharashtra in India. The rest represent a diaspora in United Arab Emirates, United Kingdom, United States, Canada, with smaller numbers in other countries. 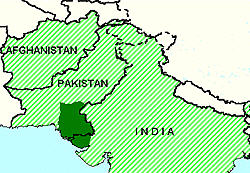 The earliest written reference to Sindhi dates back to the 2nd century AD. The language is thought to have evolved from an ancient Prakrit brought to Sindh by early settlers from Northeast and Northwest India. Sindh was conquered by Dravidian-speaking invaders around 4,000 BC. As a result, Sindhi shows many signs of Dravidian influence. Around 1500 BC, Sindh was conquered by Indo-Aryan invaders who established the Vedic civilization that laid the foundation of Hinduism and the Indian culture of today.

The earliest ever translation of the Qur’an was into Sindhi in the 12th century. In the 14-18th centuries Sindhi was one of the most popular literary languages in the eastern world due to its rich vocabulary.

Sindhi is an official language of two countries.

According to Ethnologue, Sindhi has numerous dialects which differ in pronunciation, grammar, and vocabulary.

The phonological system of Sindhi is similar to that of other Indo-Aryan languages, for instance, Sindhi has a large inventory of phonemes, i.e., sounds that make a difference in word meaning. Most Sindhi syllables end in a vowel or semi-vowel. Very few syllables end in a consonant, and consonant clusters are infrequent.

Sindhi has a full series of consonants, more than most other Indo-Aryan languages. Consonants in parentheses are infrequent and mostly occur in loanwords.

Sindhi has retained many features of ancient Prakrit and shares major grammatical features with other Indo-Aryan languages, such as the use of postpositions which follow the noun, rather than prepositions that precede it.

Sindhi verbs consist of three basic components (adverbial participle, basic verb and auxiliary verb) which appear in various combinations, depending on tense, aspect and mood. Verbs agree with their subjects in person, gender, and number. Pronoun subjects are often omitted if the context is clear. Verbs display the following categories:

The normal word in Sindhi is Subject-Object-Verb. However, these components can be rearranged to mark emphasis or focus. Adjectives and relative clauses precede the nouns they modify. Indirect objects precede direct objects. Negative/interrogative elements precede the verb. Adverbs typically follow the subject and precede the object(s) of the verb.

Most Sindhi words are derived from Sanskrit, but the language also has a large number of Persian and Arabic loanwords due to centuries of Muslim influence. In more recent times, Sindhi has come into close contact with Urdu, the dominant language of Pakistan. As a result, Sindhi has borrowed many Urdu words.

Below are Sindhi numerals 0-10 in romanization.

Sindhi is written in three different scripts: a modified Arabic script used in both Pakistan and India, and the Devanagari script used by a number of Sindhi speakers in India.

How difficult is it to learn Sindhi?
There is no data on the difficulty of Sindhi for speakers of English.