Somali (Af-Maxaad Tiri, Af Soomaali, الصوماليه) belongs to the Cushitic branch of the Afro-Asiatic language family. Its is closest relative is Oromo. 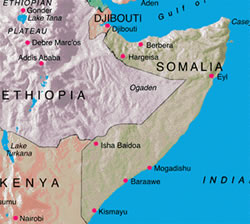 Somali is spoken by 6.5 million people in Somalia where it has been the national language since 1972. It is also spoken in Ethiopia, Djibouti, and Kenya. The total number of Somali speakers worldwide is estimated at close to 15 million (Ethnologue). The figure actually may be somewhat higher. It is difficult to collect reliable dataabout the numerous expatriate Somali communities around the world.

In Somalia, Somali is spoken by most of the people in the country. It is used in education, administration and the media. It is taught as a subject and used as a medium of instruction in the primary schools and as a subject in secondary schools. There are many radio and TV stations around the world that broadcast some of their programs in Somali.

Somali shares many features with other Cushitic languages. For instance, Somali syllables typically end in a vowel or a single consonant, consonant clusters do not occur in the beginning or at the end of words, and roots usually consist of one or two syllables.

Somali has five vowel phonemes, i.e., sounds that differentiate word meaning. The number of vowel phonemes can differ somewhat from dialect to dialect. The vowels can be short or long. Vowel length makes a difference in word meaning. In the table below, long vowels are marked by a macron over the vowel. In the orthography, long vowels are represented by a double vowel, e.g., Soomaali. In addition to short and long vowels, Somali has numerous diphthongs.

Somali has 24 consonants. Like its close relative, Oromo, native Somali words do not have the consonants /p/, /v/, and /z/. These sounds occur only in borrowed words. The language is rich in velar, uvular, pharyngeal, and glottal consonants, sounds that are produced at the back of the oral cavity.

The tonal system of Somali is similar to that of Oromo. There are three basic tones: high (marked by an acute accent), low (marked by a grave accent), and falling (marked by a circumflex accent). Somali tone operates at the grammatical, rather than at the lexical level, as it does in languages such as Chinese. For instance, the masculine-feminine distinction is represented by tone in words such as ínan ‘boy’ and inán ‘girl.’ Tone is closely associated with stress: high tone has strong stress, falling tone has weaker stress, and low tone has no stress. Stress typically falls on the final or on the penultimate vowel of a word.

Somali is an agglutinative language that uses suffixes attached to roots for representing grammatical information.

Somali nouns are marked for the following categories:

Pronouns have the following features:

Somali verbs consist of a stem to which suffixes are added. Verbs in indicative mood exist in four tenses, present, present continuous, past and past continuous, in addition to a subjunctive mood form for present and future tense. Verbs in Somali conjugate mainly through the addition of suffixes, although a very small number of common verbs maintain an archaic conjugation using prefixes.Verbs are marked for the following categories:

Word order in Somali sentences is typically Subject-Object-Verb. In general, Somali has a topic-focus grammatical category that marks the information structure of sentences, i.e. those elements that indicate where the focus is located in the sentence.

Somali vocabulary is Cushitic in origin. The most productive ways of word derivation are reduplication and compounding. Somali has been heavily influenced by Arabic mainly through the medium of Islam. It has also borrowed words from the languages of its former colonizers, such as Italian, English, and French.

Below are a few basic words and phrases in Somali.

Below are Somali numbers 1-10.

Somali was not written until the Osmanya alphabet was developed in 1920. Osmanya is written from left to right in horizontal rows. The names of the letters were taken from Arabic. 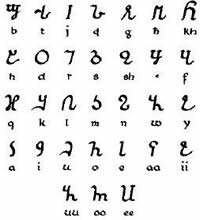 The Latin alphabet was adopted in 1972. Below is the current Somali Latin-based alphabet with the letters listed in the traditional Arabic order. There is no standardized orthography so variations occur.

Take a look at Article 1 of the Universal Declaration of Human Rights in the Latin-based Somali alphabet.

How difficult is it to learn Somali?
There is no information on the difficulty level of Somali for speakers of English.