Vietnamese (tiếng Việt), formerly known as Annamese, is a member of the Mon-Khmer branch of the Austro-Asiatic language family. With 76 million speakers, it is the 16th largest language of the world. It is spoken by 75 million people in Vietnam . It is also spoken in Australia, Cambodia, Canada, China, Côte d’Ivoire, Finland, France, Germany, Laos, Martinique, Netherlands, New Caledonia, Norway, Philippines, Senegal, Thailand, United Kingdom, USA, and Vanuatu.

It is thought that the ancestor of Vietnamese originated in the area of the Red River in what is now northern Vietnam and that it eventually spread into central and southern portions of the area. 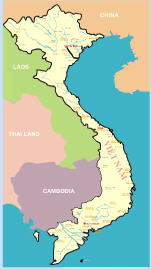 Click on the Modern Language Association Interactive Language Map to see where Vietnamese is spoken in the United States.

After the revolution that ended the French colonial rule, Vietnamese became the national and official language of the Socialist Republic of Vietnam where it is spoken by the majority of the country’s population. It is used in Vietnam throughout all levels of the educational system, including higher education, for all official and non-official communication, in the media, and in publishing.

There are three mutually intelligible dialects of Vietnamese (Ethnologue):

Vietnamese is a tonal language with a large number of vowels. There are no consonant clusters. The syllable structure is generally Consonant-Vowel-Consonant with no consonant clusters, there is a good deal of variation in the sound system across different dialects. The description of the sound system below is based on the Hanoi dialect which is considered to be the standard.

Vietnamese is a vowel-rich language with 11 simple vowels and a variety of diphthongs and triphthongs. The correspondence between pronunciation and writing is quite complicated as far as vowels are concerned. The same letter can represent either two different monophthongs, or both a monophthong and a diphthong, or different letters can represent the same monophthong.

Vietnamese is a tonal language, i.e., the meaning of words is affected by the tone with which the vowels are pronounced. Vietnamese tones are quite complex because vowels can be pronounced with variations in pitch, length, contour, intensity, and degree of vocal cord constriction. There are six tones in Vietnamese. Their pronunciation varies from dialect to dialect.
&nbsp

Verbs are not marked for person or number. Tense, aspect and mood are marked by various particles.

Forms of address and reference

Speakers must use strictly prescribed terms of address and reference. Normally, one must express an attitude of humility, addressing others in honoric terms to show respect for age, knowledge, and social rank. For instance, the term ong ‘grandfather’ is used in polite formal conversations with strangers. The term anh ‘older brother’ is used between friends in informal conversations.

Below are a few common Vietnamese words and phrases.

Below are Vietnamese numerals 1-10.

Vietnamese was written with modified Chinese characters, known as Chu-nom (chữ nôm, 字喃) during 2nd-10th centuries BC, when Vietnam was a province of China. Chu-nom was a mixture of standard Chinese characters and characters specially designed to represent Vietnamese words. Present-day Vietnamese is written with a Latin-based alphabet developed in the 17th century by a French Jesuit missionary Alexandre de Rhodes (1591-1660) who based it on the work of earlier Portuguese missionaries. The script was used mainly for religious texts, but was eventually extended to other types of writing. When the French occupied Vietnam in the 19th century, the script became a requirement for all public writing. It became predominant by the beginning of the 20th century when education in Vietnam became more widespread.

Below is the Latin-based Vietnamese alphabet.

The letters f, j, w, z are not part of the Vietnamese alphabet. They are used only in foreign names and loanwords.

Marking of tones is obligatory which results in double diacritics for most vowel letters.

Take a look at Article 1 of the Universal Declaration of Human Rights in Vietnamese.

How difficult is it to learn Vietnamese?
Vietnamese is considered to be somewhat more difficult than other Category II languages for speakers of English.