Lingala, Ngala, is a Bantu language that belongs to the Niger-Congo language family. It is spoken in the northwest of the Democratic Republic of the Congo and in the Republic of the Congo. There are also Lingala speakers in Angola and in the Central African Republic. It is thought that Lingala originated from Bobangi (Bangi), a language that has historically functioned as a trade language along the Congo River. With Belgian colonization of the area in the latter part of the 19th century, Bobangi spread into other areas. The colonial administration needed a common language for missionary and administrative purposes, and Bobangi fit their purpose. This common language was called Bangala, as distinct from Bobangi. Catholic missionaries attempted to standardize the language and expand its vocabulary. In the process, the language was renamed Lingala, a term that first appeared in 1903. 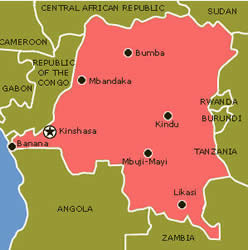 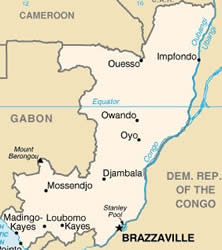 There are varying estimates of the number of Lingala speakers due to the fact that it is a trade language spoken as a second language by speakers of other languages in areas in which it is spoken. It is spoken by 2.0 million people as a first language and an additional 5 million people as a second language in the Democratic Republic of the Congo and in the Republic of the Congo (Ethnologue). Other estimates place the total number of speakers at 10 million.

Lingala can be divided in two major varieties: Standard Lingala and Spoken Lingala.

The following description is of Standard Lingala, i.e., the literary variety of the language used in formal contexts. All syllables in Standard Lingala end in a vowel. There are no consonant clusters, except /mw/. Borrowed words are adapted, so that English milk, for instance, becomes miliki.

Standard Lingala has 7 vowel phonemes, i.e., sounds that make a difference in word meaning. However, Lingala spoken in Kinshasa has only five vowels. It lacks the vowels /ε / and /ɔ/.

The consonant system of Standard Lingala is distinguished by the presence of prenasalized voiced consonant phonemes /mb/, /nd/, /ŋg/ and /nz/. Prenasalized consonants are sequences of nasal+consonant that behave like a single consonant.

Lingala has two tones: high and low. They are used to distinguish between otherwise identical pairs of words and to mark grammatical functions. High tone is represented with an acute accent, while the low tone is unmarked. However, the tone is not always marked in writing.

The grammar of Lingala shares many features with other Bantu languages. Its major feature is the classification of nouns into various classes and an elaborate verb system.

As is common in Bantu languages, Lingala verbs are highly agglutinative. Below are some of their main features:

The basic word order in Lingala is Subject-Verb-Object. However, the subject may follow the verb if the latter is being emphasized.

Prolonged contact with French has resulted in the infusion of many French words into Lingala. Words related to modern living, especially science and technology, are generally borrowed from French. There are also borrowings from Portuguese, e.g., manteca ‘butter’, and English, e.g., buku ‘book’, as well as from neighboring languages such as Koongo, Kituba and Swahili.

Below are a few common words and phrases in Lingala.

Below are Lingala numerals 1-10.

Lingala was first reduced to writing in the early 1900s. Today, it is written with an adapted version of the Latin alphabet, but there is no standard orthography and literacy rates among Lingala speakers are very low.

Take a look at Article 1 of the Universal Declaration of Human Rights in Lingala.

How difficult is it to learn Lingala?
There is no data on the difficulty of Lingala for speakers of English.