All members of the Tai-Kadai (also known as Kadai or Kam-Tai) language family evolved from an ancestral language called Proto-Tai which is thought to have originated in the area between northern Vietnam and southeastern China. Some 2,000 years ago, speakers of the Tai languages moved southward into Southeast Asia. Today, languages belonging to the Tai-Kadai language family are spoken by an estimated 85 million people in Southeast Asia in an area extending from Thailand into Laos, Vietnam, China, Burma, and India. The two national languages of the group, Thai and Lao, account for well over half the total of Tai-Kadai speakers. The spelling “Thai” is used for the national language of Thailand and for some regional varieties in that country. “Tai” is used for the wider Tai subfamily of Tai-Kadai and also in the names of some specific varieties.

According to Ethnologue, the Tai-Kadai family includes 76 languages. The distribution of the languages is very complex with much 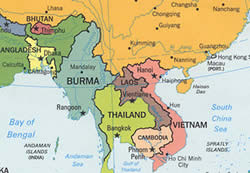 overlapping and interpenetration of the languages. The total number of first-language speakers of Tai-Kadai languages is estimated to be around 85 million people. The largest number of speakers live in Thailand (around 45 million), followed by China with around 15 million. Smaller numbers live in other countries such as Vietnam, Assam, Burma, Laos, France, Europe, UK, U.S., and Canada.

The Tai-Kadai family is usually divided into three major branches, all of which are extraordinarily diverse:

Some linguists consider the Southwestern and Central branches to be one.

Only Thai and Lao are official languages of sovereign countries. Some of them, e.g., Gelao and Laha, are official nationalities in Vietnam and China respectively.

Consonant systems are relatively simple. There are no consonant clusters. Only a few consonants can occur in syllable-final position.

There is a great diversity among Tai-Kadai languages in grammatical morphemes, such as particles and various grammatical markers. However, they all share some general features.

Thai has a complex system of pronouns. The choice of pronouns in any given situation is determined by the sex, age, social position and the attitude of the speaker towards the addressee. Different pronouns are used in different situations.

Verbs are not inflected for person, number, tense, aspect, or mood. These functions are determined by context or by adverbs and expressions of time.

Particles
All Tai-Kadai languages have a wide range of particles. Among them are the following (as in Thai):

Most words are monosyllabic, except for loanwords, compounds, and reduplications.
The lexicon of Tai-Kadai languages shows different influences. For more abstract and technical vocabulary the languages spoken in Vietnam and China rely on borrowings from Chinese. Languages to the west had borrowed from Sanskrit, Pali and Khmer.

Tai-Kadai languages in the southern and western areas, with long cultural connections to India, have been using syllabic Brahmi-based writing systems for over seven hundred years. Eight such scripts are currently in use. To the north and east, varieties in contact with Chinese once used modified character-based writing but romanizations have been recently introduced. Many languages in this family have never been written. Below are four examples: