Hindi, also known as Khadi Boli, Khari Boli, belongs to the Indo-Aryan branch of the Indo-European language family. It is spoken as a first language primarily in northern and central India by more than 258 million people (Ethnologue). It is the language that unifies multilingual India, home to some 400 different languages/dialects. Outside of India, Hindi is spoken in Australia, Bangladesh, Belize, Bhutan, Botswana, Canada, Djibouti, Equatorial Guinea, Germany, Guyana, Kenya, Nepal, New Zealand, Philippines, Singapore, Sint Maarten, South Africa, United Arab Emirates, United Kingdom, United States, Yemen, Zambia (Ethnologue). Such a wide distribution makes Hindi one of the most spoken languages of the world. 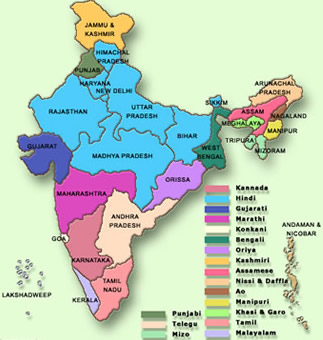 The name Hindi is of Persian origin. The Persians used it to refer to the Indian people and to the languages they spoke. Scholars postulate that Hindi developed in the 8th-10th centuries from khari boli, the speech around Dehli which was adopted by the Moslem invaders to communicate with the local population. Eventually, it developed into a variety called Urdū (from Turkish ordu ‘camp’), characterized by numerous borrowings from Persian and Arabic, which became a literary language. In the meantime, the language of the indigenous population remained relatively free of borrowings from Persian and Arabic, and instead borrowed words and literary conventions from Sanskrit. This language became Hindi.

As a result of these different influences, Hindi is written in the Devanagari script and draws much of its vocabulary from Sanskrit, while Urdū is written in the Perso-Arabic script and draws a great deal of its lexicon from Persian and Arabic. The two languages also differ in a number of relatively minor ways in their sound system and grammar. Both Hindi and Urdū have been used as literary languages starting in the 12th century. Under the influence of English, Hindi and Urdū literature flourished starting in the 18th century.

Hindi and Urdū have a common colloquial form, called Hindustani. Hindustani never achieved the status of a literary language, although Mahatma Gandhi used it as a symbol of national unity during India’s struggle for independence from England.

After the Independence of India from Britain in 1947, the Government of India undertook the standardization of the language. In 1958, ‘A Basic Grammar of Modern Hindi’ was published as a result of the work of a government-appointed committee. Hindi spelling was standardized, and a standardized system of transcribing the Devanagari alphabet was devised.

For speakers of India’s approximately 400 languages/dialects to function within a single country requires some common language. The choice of this language, known in India as the ‘link’ language, has been a sensitive political issue since independence in 1947. Efforts to reach a consensus on a single national language that is acceptable to all the diverse language communities have been largely unsuccessful.

Both Hindi and English are extensively used, and each has its own supporters. On the one hand, native speakers of Hindi, concentrated in northern and central India, assert that English is a relic from India’s colonial past. In addition, since it is spoken mostly by the country’s educated elite, it is too exclusive to be India’s official language. Proponents of English, on the other hand, argue that the use of Hindi is unfair because it disadvantages those who have to learn it as a second language.

Education in English continues to be a prerequisite for social status. English remains the sole language of higher education in almost every field of learning. Code-switching between Hindi and English is extremely common, especially among educated Indians.

Click on the MLA Interactive Language Map to find out where Hindi is spoken in the U.S.

The sound system of Hindi is fairly typical of Indo-Aryan languages.

The exact number of consonants is difficult to determine due to regional differences in pronunciation. In addition, the extent to which consonant sounds that appear only in borrowed words should be considered part of Standard Hindi is also a matter of debate. In the table below, consonants that do not occur in all varieties of Hindi, and those that occur primarily in borrowings are given in parentheses.

Stress in Hindi/Urdu normally falls on the penultimate (i.e., next to the last) syllable of a word. The position of stress alone does not affect word meaning.

Hindi is a highly inflected language which utilizes prefixes and suffixes to form words and to express grammatical relations. Hindi uses postpositions, rather than prepositions to express various case relationships. Postpositions require that the nouns be used in the oblique case.

Hindi nouns are marked for the following categories:

Hindi verbs are characterized by the following:

Second-person personal pronouns are marked for three levels of politeness. Verbs in the 2nd person are also marked for politeness.

Here are a few common Hindi phrases in transcription and in Devanāgarī.

Below are Hindi numerals 0-10 in transcription.

Hindi is written in the Devanāgarī script, a descendant of the Brāhmī script. Devanāgarī script is also used for writing Sanskrit, Marathi, and Nepali. There is a fairly good correspondence between the characters and the sounds they represent. The Devanāgarī script is a syllable-based writing system in which is each syllable consists of a consonant plus an inherent vowel /ə/. There are a number of rules governing the realization of inherent vowels. Vowels have different representations in writing depending on whether they are independent or following a consonant. Devanāgarī is written from left to right. Sentences are separated by vertical lines.

Take a look at Article 1 of the Universal Declaration of Human Rights in Devanāgarī and in romanization.

Hindi words in English
English has borrowed a number of words from Hindi. Among them are these familiar ones: