Macedonian is spoken by some 1.3 million people in the Republic of Macedonia. It is also spoken in neighboring Balkan countries of Albania, Bulgaria, Greece, Hungary, and Slovenia, as well as in Australia, the U.K., and U.S. The Population total for all countries is estimated at 1.4 million people (Ethnologue). 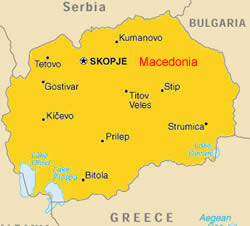 The status of Macedonian in the countries where it is spoken is as follows:

Standard Macedonian is based on the West Central variety with some features of the Northern variety spoken in Skopje, the capital of Macedonia.

Macedonian has five vowels. Unstressed vowels are not reduced as is the case of many Slavic languages.

Below is a table of Macedonian consonant phonemes, i.e., sounds that make a difference in word meaning. Like all Slavic languages, Macedonian allows a variety of consonant clusters.

Stress is normally fixed on the antepenultimate (third to the last) syllable of the word.

Macedonian grammar is quite similar to that of Bulgarian.

There are two sets of numerals in Macedonian: one set is used with non-human nouns, while the other set is used with male or mixed gender human groups, e.g., dva konja ‘two horses,’ but dvajca maži ‘two men.’

Below are some common phrases in Macedonian.

Below are the numerals 1-10 in Macedonian Cyrillic and Latin scripts.