Lithuanian (lietuvių kalba) belongs to the Baltic branch of the Indo-European language family. It is spoken in Lithuania by 2.8 million people. Besides Lithuania, it is spoken in Latvia, Estonia, Poland, Canada, and the US. The worldwide population of Lithuanian speakers is estimated at around 3 million (Ethnologue).

The closest relative of Lithuanian is Latvian, but the two languages are not mutually intelligible. Both are thought to have evolved from a hypothetical common ancestor called Proto-Balto-Slavic. It is hypothesized that they started to split starting around 800 AD, and that there was a long period when Lithuanian and Latvian were two dialects of one language, until possibly as late as the 16th-17th centuries, when they finally emerged as two distinct languages. 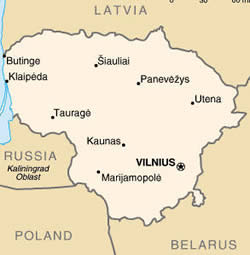 Both Lithuanian and Latvian have retained many features of Proto-Indo-European, especially in their noun systems. Of the two languages, Lithuanian is the more conservative, having retained more archaic forms than Latvian. These features have been attested only in extinct Indo-European languages. For this reason, Lithuanian has been closely studied by scholars of Indo-European linguistics.

Lithuanian has been the official language of Lithuania since 1918. Today, it is one of the official languages of the European Union. According to the 2017 CIA World Factbook, Lithuanian is spoken in Lithuania by 84% of the country’s 2.8 million inhabitants. Other languages spoken include Polish, Russian, and Belarusian. There is a fairly widespread diaspora with Lithuanian spoken in emigrant communities in Argentina, Australia, Brazil, Canada, Denmark, Estonia, France, Germany, Iceland, Ireland, Norway, Russia, Spain, Sweden, the United Kingdom, the United States, and Uruguay. One estimate (Wikipedia) estimates the total number of Lithuanian speakers worldwide at 3.2 million.

When Lithuania gained independence from the former Soviet Union in 1991, a large number of publications in Lithuanian started to appear once again. Today, there is a thriving publishing industry as well as television and radio broadcasts in Lithuanian.

Lithuanian is divided into several distinct dialect areas that do not have a high degree of mutual intelligibility. Standard Lithuanian is based on Aukštaitian (Highland Lithuanian) taught in schools.

Most words in Lithuanian end in a vowel or [s].

The Lithuanian vowel system is characterized by vowel length which makes a difference in word meaning. In addition, Lithuanian has the diphthongs /ai, ei, ui, oi, au, eu, ie, uo/.

Lithuanian has 23 consonant phonemes, i.e., sounds that distinguish word meaning. All consonants can be unpalatalized or palatalized, i.e., pronounced with the blade of the tongue raised towards the roof of the mouth (hard palate). Palatalization distinguishes word meaning.

One distinctive feature of Lithuanian (not found in Latvian) is the contrast between palatalized and non-palatalized consonants before back vowels. Before front vowels palatalization is automatic. Another contrast, manifested in all stops. affricates and fricatives, is between voiceless and voiced.

Stress can fall on any syllable in a word. It is not normally marked in the orthography. However, some dictionaries and grammars mark stress in a grave accent.

Lithuanian has a pitch accent system thought to have been retained from Proto-Indo-European. The pitch of the vowel distinguishes the meaning of words. Tones occur in long vowels and diphthongs. They ar are not marked in the orthography, except for dictionaries and grammars. The falling tone is marked with an acute accent, and the rising tone with a tilde above the vowel.

Lithuanian is a richly inflected language that has retained some of the complex morphology of its ancestral Proto-Indo-European.

Lithuanian verbs consist of a stem plus suffixes. Verbs are characterized by the following features:

The neutral word order in Lithuanian sentences is Subject-Verb-Object. However, other word orders are possible since cases indicate the function of words in the sentence. Changes in word order indicate shifts in emphasis.

Lithuanian is one of the most conservative modern Indo-European languages. It has even preserved some words that are identical to or are very similar to their counterparts in Sanskrit , e.g.,

The basic vocabulary is inherently Lithuanian. The main mechanisms of word formation are prefixation, suffixation and compounding. There are many words that were borrowed over time, e.g., stiklas ‘glass’ from Russian steklo; muilas ‘soap’ from Russian mylo; reklama ‘advertisement’ from Russian reklama. Lithuanian has also borrowed a number of international words, e.g., telefonas, radijas, televizijas. Since independence in 1991, English has replaced Russian as the source of borrowed words.

Below are some basic words and phrases in Lithuanian.

Below are the Lithuanian numerals 1-10.

Lithuanian, along with all Baltic languages was first written down relatively late in its existence as a distinct language. Some sources indicate that the first evidence of written records in Lithuanian appeared in the first half of the 16th century when the first alphabet was introduced. In 1547, Martynas Mažvydas compiled and published the first printed Lithuanian book. The level of literacy among Lithuanians remained low throughout the 18th century. In addition, between 1864 and 1904, the printing and teaching of Lithuanian were banned, and the use of Cyrillic was mandated by the Czarist government of Russia. After the ban was lifted in 1904, there was a resurgence of Lithuanian literature. From 1918 to 1940, Lithuania was independent and literature flourished. After the country became independent from Russia in 1991, Lithuanian literature once again began to flourish.

Modern Lithuanian is written with a modified Roman alphabet consisting of 32 letters.

Take a look at Article 1 of the Universal Declaration of Human Rights in Lithuanian.