The Yuè dialects, also known as Cantonese (Guăngdōnghuà), are one of the major dialect groups of China. They are spoken by 52 million people in the province of Guăngdōng and in the city of Guăngzhōu (Canton), as well as in Hong Kong, Macau, and in expatriate Chinese communities and Chinatowns in Southeast Asia, Europe, and the United States. The total number of Cantonese speakers is estimated at 62 million people (Ethnologue)*. The origins of Cantonese are not known due to absence of reliable historical records, however, it is generally agreed that it had developed linguistics traits that distinguished it from other Chinese dialects by the time of the Tang Dynasty (618-907 AD).

*These numbers may be outdated. 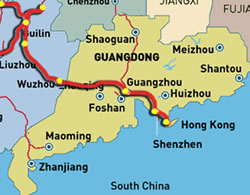 In PRC, Cantonese is spoken along with Mandarin. The latter is used as the medium of education and government administration. Because of PRC’s language policies, most people in China today are proficient in Mandarin. As a consequence, Cantonese-Mandarin bilingualism is increasing in Cantonese-speaking provinces of the country. However, Cantonese continues to be the language of everyday communication both inside and outside of the home. It is also used in electronic and print media.

Cantonese is the de facto official spoken variety of Chinese along with English. It is the language of choice for education, business, government, and the media. For instance, Hong Kong’s important and popular film industry is in Cantonese. It is too early to predict the effects of unification on the status of Cantonese in Hong Kong and Macau.

Click on the MLA Interactive Language Map to find out where Chinese (all dialects) is spoken in the United States.

Cantonese is considered to be a conservative dialect, its sound system having preserved the final consonants and tones of the Tang Dynasty literary standard.

The vowel inventory of Cantonese is a matter of some debate among linguists, with the number of phonemes (sounds that distinguish word meaning) differing, depending on the analysis. All vowels are long in final position. The table below shows 7 vowel phonemes.

There are several ways to mark tones in Cantonese.

Cantonese, like all other Chinese languages, is predominantly an isolating, or analytic, language, meaning that for the most part, words have only one grammatical form. Grammatical functions are expressed through word order, particles, prepositions, and discourse, rather than by suffixes attached to nouns or verbs, such as in Indo-European languages. Because of the lack of inflections, Chinese grammar may appear quite simple as compared to that of Indo-European languages.

Like Mandarin, Cantonese is a topic-prominent language. This means that the topic of the sentence (defined as old or known information) precedes new or added information. In Cantonese, direct objects precede indirect objects, and certain adverbs precede verbs, while the opposite is true in Mandarin.

Cantonese shares most of its vocabulary with Mandarin and other Chinese varieties, but the number of English loanwords in Cantonese, especially in Hong Kong, is much greater than that in Mandarin.

Below are the numbers 0-10 in Cantonese (in comparison to Mandarin).

The first written documents in Cantonese date back to the 19th century. Today, written Cantonese is used mainly in personal correspondence, popular newspapers and magazines, and in fiction. Mandarin is used for all formal and official purposes.

Cantonese can be written in two different versions:

There are several competing systems for writing Cantonese with the Latin alphabet. They differ mostly in the representation of vowels and tones.

Take a look at Article 1 of the Universal Declaration of Human Rights in Cantonese in Yale Romanization. For the sake of comparison, the same text in Mandarin is also given. Although the characters are the same, they are pronounced quite differently in the two dialects.

English has borrowed a number of words from Cantonese. Below are a few of them.