Welsh (Cymraeg) is a member of the Brythonic (or British) group of the Celtic branch of the Indo-European language family. It is spoken by 562,000 people in the north, west, and south of Wales (Ethnologue). Ethnologue estimates that there are 591,000 users of Welsh worldwide. 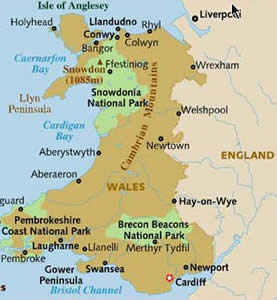 With the Germanic and Gaelic colonization of Great Britain, the Brythonic speakers in Wales were split off from those in other parts of Britain. As a result, the languages diverged and became Welsh, Cornish, and Cumbrian. The latter became extinct in the 11th century.

Welsh is the de facto provincial language in Wales. There are large numbers of Welsh people who speak Welsh, but monolingual speakers of Welsh are relatively rare today since most Welsh speakers speak English. English-Welsh code-switching is a very common phenomenon.

The U.K. government has ratified the European Charter for Regional or Minority Languages with respect to Welsh. Although Welsh is a minority language, and thus threatened by the dominance of English, support for the language grew during the second half of the 20th century, along with a rise of nationalism. Welsh is compulsory in most Welsh schools up to age 16. Many Welsh primary and secondary schools provide Welsh-medium education to over 82,000 children. The language is widely used on the radio and TV. It is the language of daily communication in many parts of Wales. Most people in Wales believe that Welsh should have equal status with English.

Welsh is usually divided into Northern (Cymraeg y gogledd) and Southern (Cymraeg y de) dialects that differ in pronunciation, grammar, and vocabulary. The differences between the dialects are much more pronounced in the spoken than in the written language. Patagonian Welsh spoken in Argentina is influenced by the surrounding Spanish.

Welsh phonology shares many features with that of other Celtic languages.

In addition to the vowels listed above, there are also many diphthongs.

The full inventory of Welsh consonant phonemes is given below.

Stress in Welsh polysyllabic words falls most commonly on the penultimate (one before last) syllable.

The grammar of Welsh shares many features with the grammar of other Celtic languages. A distinguishing feature of Welsh, as of all Celtic languages, is initial consonant mutation. This means that the first consonant of a word may change depending on grammatical context. Welsh has three mutations which are illustrated below.

Welsh verbs are marked for the following grammatical categories:

The normal word order in Welsh is Verb-Subject-Object. Adjectives normally follow the noun they modify.

While Welsh has borrowed some words from English, the bulk of its vocabulary is inherently Celtic. Below are a few common words in Welsh.

Below are the Welsh numerals 1-10.

Middle Welsh (12th-14th centuries) is well-documented, since it is the language of the Mabinogion, a collection of prose stories from medieval Welsh manuscripts. Early Modern Welsh (14th-16th centuries) was the language used by the great Welsh poet Dafydd ap Gwilym. The publication of William Morgan‘s translation of the Bible in 1588 had a strong stabilizing effect on the language. Welsh literature is the oldest in Europe after Greek and Latin, going back to the 6th century AD. The earliest known examples of Welsh literature are the 6th century poems of Taliesin whose name is associated with a 10th century book of poems.There are two written varieties of Welsh: Colloquial Welsh (Cymraeg llafar) and Literary Welsh (Cymraeg llenyddol). Colloquial Welsh reflects differences in the spoken dialects, whereas Literary Welsh shows little dialect differentiation.

Welsh is written with an adapted version of the Latin alphabet.

Welsh makes use of a number of diacritics, but not consistently:

Take a look at Article 1 of the Universal Declaration of Human Rights in Welsh. .

English has borrowed few words from Welsh, for example:

How difficult is it to learn Welsh?
There is no data on the difficulty level of Welsh for speakers of English.