Warlpiri (Elpira, Ilpara, Ngaliya, Ngardilpa, Wailbri, Walbiri, Walmama, Walpiri) belongs to the South-West Ngarga branch of the Pama-Nyungan language family, the largest of the Indigenous Australian language families. It is spoken by about 2,500 Warlpiri people in Australia’s Northern Territory (Ethnologue). It is one of the largest Aboriginal 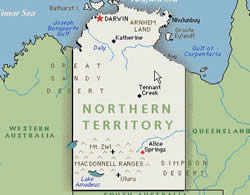 languages in Australia in terms of number of speakers.

Warlpiri has no official status in Australia. The language is endangered in spite of efforts to teach it to children in Warlpiri settlements.
In some Warlpiri communities, children and young adults use “Light Warlpiri”, a variety of speech that combines elements of Warlpiri, Australian Aboriginal Kriol (an English-based creole) and Australian English.

Warlpiri has several dialects identified by their geographical locale within the Warlpiri-speaking area:

Warlpiri has a relatively simple sound system an inventory of 21 phonemes. Consonant clusters are restricted.

Warlpiri has 18 consonant phonemes. They are given below with their orthographic representations indicated in parentheses. There are several distinguishing features of Warlpiri consonants:

Stress normally falls on the first syllable of Warlpiri words, including enclitics.

All Warlpiri clauses contain an auxiliary word, which together with the verb suffix identifies tense and relationship between main and dependent clauses. The auxiliary word is usually the second word in a clause. Common auxiliaries include ka (present tense), kapi (future tense), kaji (conditional). For example,

The order of major sentence constituents is not determined by their grammatical function, but rather by pragmatic considerations, such as topic (known or old information) and focus (new or important information).

Warlpiri has no special words for numerals.

One of the most unusual aspects of Warlpiri, as of all Australian languages is the influence of kinship on speech registers, i.e., language varieties used for particular purposes or in particular social settings.

Warlpiri has a well developed and widely used sign language. It may have arisen from the tradition that bans widows from speaking during a long mourning period during which they communicate exclusively by signing.

Warlpiri orthography has been standardized in the mid 1970s. Many primary textbooks and readers and a dictionary of Warlpiri have been published since then.

How difficult is it to learn Warlpiri?
There is no data on the difficulty of Warlpiri for speakers of English.