Indo-European is a family of languages that first spread throughout Europe and many parts of South Asia, and later to every corner of the globe as a result of colonization. The term Indo-European is essentially geographical since it refers to the easternmost extension of the family from the Indian subcontinent to its westernmost reach in Europe. The family includes most of the languages of Europe, as well as many languages of Southwest, Central and South Asia. With over 2.6 billion speakers (or 45% of the world’s population), the Indo-European language family has the largest number of speakers of all language families as well as the widest dispersion around the world.

The cradle of the Indo-Europeans may never be known but an ongoing scholarly debate about the original homeland of Proto-Indo-European (PIE), may some day shed light on the ancestors of all Indo-European languages as well as the people who spoken it. There are two schools of thought: 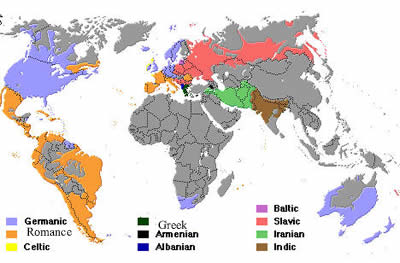 Since PIE left no written records, historical linguists construct family trees, an idea pioneered by August Schleicher, on the basis of the comparative method. The comparative method takes shared features among languages and uses procedures to establish their common ancestry. It is not the only method available but is one that has been most widely used. The examples below show how this method actually works with some Indo-European languages.

Indo-European languages are classified into 11 major groups, 2 of which are extinct, comprising 449 languages (Ethnologue).

Baltic
This conservative group has preserved many archaic features thought to have been present in PIE. Some scholars think that Baltic languages share a common ancestral language with the Slavic languages. This hypothetical language is called Balto-Slavic.

Celtic
Celtic languages were largely unknown until the modern period. They were once spread over Europe in the pre-Christian era. The oldest records of these languages date back to the 4th century AD.

In addition to these main groups, there are fragmentary records of other Indo-European languages. These records, mostly in the form of inscriptions, do not provide sufficient material for the reconstruction of PIE.

Sound system
There have been numerous attempts to reconstruct the vowels and consonants of PIE, all of which encountered serious problems due to the uneven nature of the written records and to the huge differences in the age of the records. As a result, the reconstruction of PIE phonology continues to be a matter of scholarly debate and speculation. Among the most notable reconstructions are those by August Schleicher, Karl Brugmann, Winfred Lehmann, Oswald Szemerènyi, and Jacob Grimm.

First Germanic Sound Shift (Grimm’s Law)
You probably know of Jacob Grimm as the author of fairy tales. But he was also one of the great linguists of the 19th century. He found evidence for the unity of all the modern Germanic languages in the phenomenon known as the First Germanic Sound Shift (also known as Grimm’s law ), which set the Germanic branch apart from the other branches of the Indo-European family. This shift occurred before the 7th century when records started to be kept. According to Grimm’s law, the shift occurred when /p, t, k/ in the classical Indo-European languages (Latin, Greek, and Sanskrit) became /f, t, h/ in Germanic languages. For example, Latin pater > English father, Latin cornu > English horn.
You can easily see the resemblances among four common words across five Indo-European languages.

Click here for an amusing illustration of Grimm’s Law and of words for family, plants, animals, sky, and counting in nine Indo-European languages.

The terms centum-satem come from the words for ‘one hundred’ in representative languages of each group. Please note that not all languages fall neatly into these categories.

Stress
It is believed that PIE had a pitch accent system. All words had only one accented syllable which received a high pitch. Stress could fall on any syllable of a word.

Many of the older well-documented languages, such as Sanskrit, Greek, and Latin, have rich morphologies with clearly marked gender and number, as well as elaborately marked case systems for nouns, pronouns, and adjectives. Verbs in these languages also have elaborately marked systems of tense, aspect, mood, and voice, in addition to person, number, and gender. Reconstructed PIE is based on the assumption that it contained all the features found in attested languages. If a given language lacks a particular feature, it is assumed that the feature was lost or that it had merged with other features.

Modern Indo-European languages reflect the rich morphology of PIE to various degrees. For instance, Sanskrit, Greek, Latin, Baltic, Slavic, Celtic, Armenian have extremely rich morphologies. On the other hand, Germanic, Romance, Albanian, and Tocharian do not possess quite as many finely differentiated morphological features.

Verbs
Reconstructed PIE verbs had different sets of endings tense/aspect, voice and mood in addition to person and number. :

Word order
Less is know about the syntax of PIE than about its morphology. What is known about PIE word order, therefore, is a subject of conjecture and debate. It is thought likely that word order in PIE sentences was Subject-Object-Verb. This word order is found in Latin, Hittite, Vedic Sanskrit, Tocharian, and to some extent in Greek.

Vocabulary
The comparative method enables linguists to reconstruct a basic PIE vocabulary referring to many common elements of their culture. This basic vocabulary is not uniformly attested across all Indo-European languages which suggests that some words may have developed later or were borrowed from other languages. Among words that are reliably reconstructed are words for day, night, the seasons, celestial bodies (sun, moon, stars), precipitation (rain, snow), animals (sheep, horse, pig, bear, dog, wolf, eagle), kinship terms (father, mother, brother, sister, son, daughter), tools (axe, yoke, arrow).