Portuguese, português or língua portuguesa, belongs to the Romance branch of the Indo-European language family. It is a widely-spoken macrolanguage and one of the world’s largest languages, ranking sixth after Chinese, Spanish, English, Hindi, and Arabic. Ethnologue estimates the worldwide population of first-language speakers of Portuguese at around 204.3 million people, while other estimates place the number at 215 million (Nationalencyklopedin).

After the Roman conquest of the Iberian peninsula, Vulgar Latin replaced the local languages. Along the Atlantic coast, it gradually evolved into Galician-Portuguese. After the incorporation of Galicia into Spain and the independent development of Portugal, it split into Galician and Portuguese. 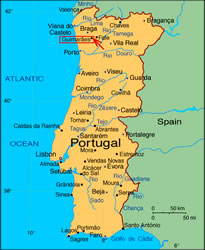 In the 14th-6th centuries, Portuguese spread to many regions of Asia, Africa and America. By the 16th century, Portuguese had become a lingua franca in Asia and Africa where it was used for colonial administration, trade, and communication between locals and Europeans. Some Portuguese-speaking communities in India, Sri Lanka, Malaysia and Indonesia preserved the language even after they were isolated from Portugal. Some of the latter eventually developed into Portuguese-based creoles.

In 1986, Portuguese became an official language of the European Union (EU). In 1996, the Community of Portuguese-speaking Countries (CPLP) was created to promote cooperation and cultural exchanges among the member countries and to create a Portuguese standard.

Click here on the MLA Interactive Language Map to find out where Portuguese is spoken in the U.S.

Portuguese is a pluricentric language, i.e., one that has two standard spoken and and two standard written standards. There are two main groups of dialects: those of the Iberian peninsula (European Portuguese) and those of Brazil (Brazilian Portuguese). The differences between the two involve pronunciation, grammar, and vocabulary. Portuguese varieties spoken in Africa and Asia are closer to those of Portugal than those of Brazil.

Portuguese has the richest vowel system of all Romance languages. It includes monophthongs, diphthongs, and triphthongs, with some differences between the vowel systems of European and Brazilian Portuguese.

The two vowel charts below are based on Wikipedia. Nasal vowels are marked by a tilde. Nasalization is the result of the lowering of the velum, or soft palate, which allows air to escape through the mouth and the nose during the production of the sound.

Primary stress may fall on any of the three final syllables of a word, but mostly on the last two. The final syllable is usually stressed when it contains a nasal, a diphthong, or a close vowel. Some vowels tend to change their quality in unstressed positions.

The grammar of Portuguese is Latin-based. As a result, it exhibits many similarities to the grammar of other Romance languages.

The most common order in Portuguese is Subject- Verb-Object. Adjectives follow the nouns they modify, e.g., casa branca ‘white house’.

Portuguese vocabulary, for the most part, is derived from Latin with some borrowings from German, Arabic, as well as from Asian, Amerindian, and African languages with which Portuguese explorers and settlers came into contact. Today, English is the major source of borrowings, primarily in the area of science, politics, and technology.

Below are some common Portuguese words and phrases.

Below are the numerals 1-10 in Portuguese.

Written materials in Portuguese date back to the late 12th century. Literary works appeared in the 13th and 14th centuries. Portuguese is written with a modified version of the Latin alphabet which is given below.

Below are some notable features of Portuguese orthography:

Modern Portuguese has two orthographic standards: one for Portugal, and one for Brazil. The most notable difference between the two orthographies is that in Brazil the first c in cc, cç, ct, and the first p in pc, pç, pt were eliminated since they are not pronounced. Below are some examples.

English has borrowed a number of words from Portuguese. A few of them are listed below.