There are many theories about the origin and affiliation of the Korean language. What makes Korean linguistic affiliation very difficult to establish is its long history of contact with Chinese and Japanese. According to the so-called Southern theory, Korean belongs to the Austronesian language family. However, according to the Northern theory, supported by a number of linguists, Korean is a member of the Altaic language family. At the same time, some linguists point to some similarities between Korean and Japanese, suggesting that it might belong in the Japonic group of languages. With the issue of the affiliation of Korean being unresolved, many sources classify it as a language isolate.

There are 48.5 million speakers of Korean in the Republic of Korea (South Korea) and another 23.3 million in the Democratic People’s Republic of Korea (North Korea). In addition, Korean is spoken by some 2.7 million people in Chinese provinces bordering North Korea. Korean speakers are also found in large numbers in Japan and Russia, the U.S., Singapore, Thailand, and many other countries throughout the world. The total number of Korean speakers worldwide is estimated to be around 77.2 million (Ethnologue).

Click on the MLA Interactive Language Map to find out where Korean is spoken in the US.

During the Japanese occupation of Korea, Japanese was declared the official language of Korea, and the use of Korean was officially banned. Koreans were even forced to change their family names to Japanese ones. With the end of the Japanese occupation in 1945, despite national division and civil war, Korean was once again established as the official language of the both Koreas. After the division of the country in 1945, each Korea developed its own national standard and language policy. Today, Modern Korean is used in all spheres of life in both Koreas. 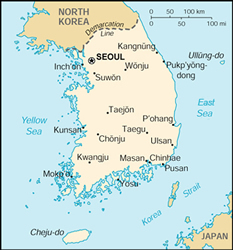 When the Korean peninsula was unified in the 7th century AD, the Han dialect became dominant. At the end of the 14th century, a Han-speaking group unified the peninsula, leading to the spread of its dialect throughout the entire peninsula. As a result, Modern Korean is based on the Han dialect. There are two standard varieties of modern Korean:

Despite the small size of the Korean peninsula, there are numerous regional dialects within these two major divisions, all of which are mutually intelligible.

Korean has ten vowel phonemes, i.e., sounds that make a difference in word meaning. A distinguishing feature of Korean vowels is that some front vowels can be rounded and back vowels can be unrounded. Korean vowels can undergo many alternations depending on their position in the word.

Korean has 21 consonant phonemes, i.e., sounds that make a difference in word meaning. A distinguishing feature of Korean phonology is a three-way contrast among the unaspirated (lax), aspirated (tense), and glottalized consonants. Aspiration is a burst of air that accompanies the release of a consonant. Glottalization is the production of consonants with a partially constricted glottis. Consonant clusters occur only in the middle, never at the beginning or at the end of words.

Speech levels in Korean are used to indicate level of respect towards the listener or the reader. Verb paradigms associated with speech levels have different sets of endings indicating level of formality or informality of the situation. The levels are divided into High, Middle, and Low. Each of these levels in further divided into sublevels. This results in seven different levels. However, in most everyday situations, only a few levels are normally used.

The normal word order in Korean is Subject-Object-Verb. There is some freedom in the order of all constituents of the sentence, except for the verb which must always be in final position. All modifiers precede the noun modified.

The use of Chinese characters brought a large number of loanwords into the Korean language with the result that more than half of Korean vocabulary is made up of borrowings from Chinese. Despite the Japanese occupation, there are surprisingly few Japanese borrowings, mostly limited to the spoken language. Korean has also borrowed from Western European languages, particularly from English.

Below are some basic words and phrases in Korean.

Korean regularly uses two sets of numerals: a native Korean system, and a Sino-Korean system. Below are the Korean numerals 1-10 in the two systems given in Hangul and in romanization.

Korean is written with an alphabetic script called Han’gŭl (한글) that was in invented in 1444 and promulgated during the reign of King Sejong. Han (한) means ‘great’, while gŭl (글) means ‘script’. The name was coined by Ju Si-gyeong (1876-1914), one of the founders of Korean linguistics. The alphbet is called Chosŏn’gŭl in North Korea. Prior to the invention of Han’gŭl, Korean was written with Chinese characters. Words of Chinese origin have traditionally been written with Chinese characters, called Hanja, even after the invention of Han’gŭl. Hanja is still used in South Korea, but is officially discouraged in North Korea.

Letters of the Han’gŭl script (with their Romanization equivalents) are given below. Although the symbols look somewhat like Chinese characters, Han’gŭl, in fact, is an alphabetic writing system in which, instead of being written sequentially in horizontal lines like letters of the Latin alphabet, symbols are grouped into blocks, each of which represents a syllable. For example, although the syllable 한 han may look like a single character, it is actually composed of three letters: ㅎ h, ㅏ a, and ㄴ n, arranged in a square block.

There are several romanization systems, of which the following two are the most widely used:

Take a look at Article 1 of the Universal Declaration of Human Rights in Han’gŭl .