Arabic (al-‘arabiyyah, العربية) is a macrolanguage. As the largest member of the Semitic branch of the Afro-Asiatic language family it includes all descendants of Classical Arabic spoken primarily across the Middle East and North Africa. Its closest living relatives are Hebrew and Aramaic. The term Arabic has several meanings. It can be used as a generic term that covers all varieties of Arabic. It can also refer to Classical Arabic, to Modern Standard Arabic, and to the numerous regional varieties of the language. Regional varieties are usually referred to as spoken, or colloquial, Arabic. Arabic has been a written language since the 6th century AD. 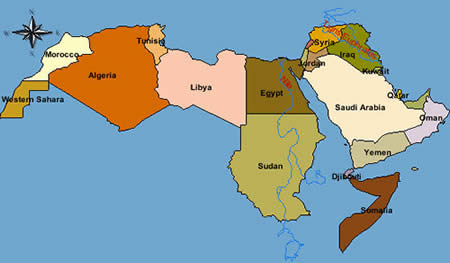 a few. These languages adopted the Arabic script and borrowed a large number of Arabic vocabulary. Words of Arabic origin can be found today in languages all over the world.

Status
It is estimated that there are 223 miillion speakers of the 30 varieties of Arabic listed by Ethnologue. A significant proportion of them can also speak and understand Modern Standard Arabic (MSA) in addition to the spoken variety learned as a first language. MSA is the official language of all Arab countries and is the only form of Arabic taught at all levels of education.

Arabic is the official or co-official language of 25 countries that include, among others, Algeria, Bahrain, Chad, Djibouti, Egypt, Iraq, Jordan, Kuwait, Lebanon, Libya, Morocco, Oman, Palestinian West Bank and Gaza, Qatar, Somalia, Sudan, Syria, Tunisia, Mauritania, United Arab Emirates, and Yemen. In addition to the Arab countries, in which Arabic speakers are concentrated, large numbers of Arabic speakers can be found all over the world.

The use of language throughout the Arab world is characterized by diglossia, i.e., proficiency in a colloquial variety and in Modern Standard Arabic, the latter to a greater or lesser extent. Modern Standard Arabic(MSA) and colloquial varieties have specialized functions. The complementary roles of MSA and colloquial Arabic vary somewhat from country to country. Below is a brief and simplified characterization of an extremely complex linguistic situation in the Arab-speaking world.

Arabic varieties with 100,000 or more speakers are listed below. The numbers are based on data from Ethnologue.

The earliest Arabic inscription dates to 512 AD. Since then, the script has undergone several modifications. Its present form (Naskh) first appeared in the 11th century AD, and has been used ever since, especially for print.

The Arabic alphabet is a fairly accurate representation of the sound system of the language. It contains 28 symbols with additional letters for loanwords that contain sounds which do not occur in Arabic, e.g., /p/ and /g/.

The Arabic script is a type of writing system in which each symbol stands for a consonant. The consonant symbols are given below. 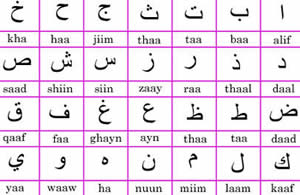 Arabic words in English
There are many words of Arabic origin in English, spread over a variety of fields. Most of them have entered English through other languages, notably French and Spanish. Below is a small sampling of Arabic loanwords. One can easily find English words starting with al– (the definite article in Arabic) in everyday English, e.g., algebra, alcohol, alcove.

How difficult is it to learn Arabic?
Arabic is considered to be a Category IV language in terms of difficulty for speakers of English.