Hebrew (‘Ivrit, עִבְרִית ), or ‘Ivrit, is a member of the Semitic branch of the Afro-Asiatic language family. It is the language of the Hebrew Bible and of the Old Testament of the Christians. The core of the Hebrew Bible, the Torah, traditionally believed to have been first recorded in the time of Moses 3,300 years ago, is written in Classical Hebrew. 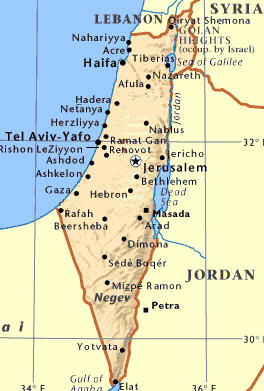 Hebrew began to die out as a spoken language after the Jews were defeated by the Babylonians in 586 BC. Spoken Hebrew was replaced by Aramaic, although it was preserved as the language of religion, learning, and literature. Hebrew was
revived as a spoken language during the late 19th and early 20th century as Modern Hebrew. It replaced Arabic, Yiddish, Russian, and a variety of other languages spoken by Jews who emigrated to Israel.

Hebrew is spoken by about 5 million people in Israel (Ethnologue). This figure includes those who speak it as a a native language and those for whom it is a second language learned to varying degrees of proficiency. It became an official language of British Palestine in 1922. Today, it is the official language of the State of Israel. It is used for official, public and private purposes throughout Israel, wih the exception of the Arab sector, where Arabic is used. Government schools teach in either Hebrew or Arabic, however, Hebrew is a compulsory subject through the tenth grade in all schools, even the Arabic ones. Hebrew is the medium of instruction at the university level as well. It is the language of most newspapers, books, magazines, radio, and television. In addition,Hebrew remains the liturgical language of Jews worldwide. There are other surveys that place the number of Hebrew speakers worldwide at 9 million, but this figure does not indicate what is meant by “speakers”.

There are two main dialects of Hebrew.

Hebrew is unique in that it was resurrected from being a written language to becoming one that is spoken today as a first language by millions of people.

Spoken Israeli Hebrew has six vowel phonemes, i.e., sounds that differentiate word meaning. The phonemes /e/ and /ə/ have merged in the speech of most Israeli speakers. In Biblical Hebrew, each vowel had three forms: short, long and interrupted, however this distinction has been lost in Modern Hebrew. The term “interrupted vowel” refers to a vowel followed by a glottal stop.

/ə/ = sound between syllables in uh-uh

Consonants in Biblical Hebrew had several characteristics that are not present in Modern Hebrew, for example:

Modern Hebrew has the following consonants:

Stress usually falls on the last syllable with a few exceptions when it falls on the penultimate syllable, e.g., in nouns with the vowel scheme eh-eh like in geshem (גשם) ‘rain’ or kesef (כסף) “money or silver’; in words with the suffix -enu, which marks 1st person plural past tense, or when marking possessive in nouns.

The grammar of Hebrew is fairly typical of all Semitic languages:

The usual word order in Modern Hebrew is Subject-Verb-Object, as opposed to Biblical Hebrew where the word order was typically Verb-Subject-Object. Modifiers follow the nouns they modify.

color=”#222222″]Vocabulary[/heading]
Most of the basic vocabulary of Modern Hebrew comes from the Bible and the Talmud. Since Hebrew was not spoken for many centuries, it lacked many words needed to deal with the modern world, so many new lexical items had to be added to the vocabulary. Some words were created from existing roots, the meaning of existing words was expanded to deal with new concepts, and a large number of words were borrowed from other languages, such as Arabic, German, Yiddish, Russian, and other European languages.

Below are some basic Hebrew words and phrases.

Take a look at Article 1 of the Universal Declaration of Human Rights in Hebrew.

English has a number of words of Hebrew origin, among them many biblical terms. A few of the loanwords are listed below:

Eliezer Ben-Yehuda
The revival of Hebrew is intimately associated with the name of Eliezer Ben-Yehuda, who was born in Russia and who came in 1881 to Palestine, then a province of the Ottoman Empire, with plans to revive the Hebrew language. Ben-Yehuda wanted the Jews in Palestine to speak Hebrew exclusively. He settled in Jerusalem, planning to use it as the base for spreading his revivalist ideas throughout Palestine and the Diaspora. His plan was to make Hebrew the language of the home and of education, and to expand the Hebrew vocabulary to meet the demands of the Israeli society. He understood that if children could learn Hebrew from a young age in school, they would become proficient in it when they grew up. In this way, Hebrew would become a living language. And so it did.