Groups of Turkic-speaking people migrated to southwestern areas of Central Asia during the 5th-6th centuries AD. The largest migration occurred in the 10th century when Oghuz tribes migrated from Mongolia to the area between the Ural mountains and the Aral sea. Despite some strong regional divisions, these tribes eventually became a single people. The Turkmen Soviet Socialist Republic was established in 1924. After the disintegration of the Soviet 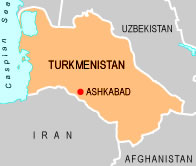 Union, it became the newly independent Republic of Turkmenistan in 1990.

Over 90% of the population of Turkmenistan consider Turkmen to be their mother tongue, while 50% report that they are bilingual in Turkmen and Russian. Turkmen,became the national language of the newly independent Republic of Turkmenistan in 1990. Along with Russian, it is used in government administration and in all official situations. It is the medium of instruction in most elementary and secondary schools. There have been attempts to use Turkmen as a medium of instruction in institutions of higher learning as well. Turkmen is also used in radio and television broadcasts. There are a number of newspapers, magazines, and books in the language. Recently, English has been added to the curriculum, and is now listed as the third state language of Turkmenistan.

The sound system of Turkmen shares several important features with the sound systems of other Turkic languages. As all other Turkic languages, Turkmen is characterized by vowel harmony, a type of phonological process that involves constraints on which vowels may be found near each other. Vowels in Turkmen words must harmonize with one another in terms of front versus back, and rounded versus unrounded. , Suffixes added to stems must harmonize with the vowels of the stems, e.g., the plural marker has the form –ler when added to kadi, and the form –lar when added to mugallym.

Turkmen has nine vowels. They can be either short or long. Vowel length makes a difference in word meaning.

Turkmen has 23 consonants, plus two that are used only in borrowed words.

Turkmen has a large inventory of consonants. There are no consonant clusters at the beginning or end of words.

Like all Turkic languages, Turkmen is agglutinative, i.e., grammatical relations are indicated by the addition of suffixes to stems. There are no prefixes. There is a one-to-one relationship between suffix and meaning, so suffixes are strung together one after another, resulting on occasion in long words. There are various rules for their ordering. Turkmen uses postpositions rather than prepositions to signal certain grammatical relationships.

Turkmen nouns have these features:

As in other Turkic languages, Turkmen sentences have a Subject-Object-Verb word. Other word orders are also possible, depending on discourse-oriented considerations such as emphasis.

Turkmen’s basic lexical stock is Turkic in origin. The language has also borrowed words from Arabic (salam ‘peace’), Persian (kerwen ‘caravan‘), and Russian (shchi ‘beet soup’). Below are a few common Turkmen words and phrases in Latin and Cyrillic scripts.

Below are Turkmen numerals 1-10 in Latin and Cyrillic scripts.

Turkmen literary tradition dates back to the 14th century AD. Classical literature flourished in the 18th-19th centuries. After the October Revolution of 1917, a literary language based on spoken Turkmen began to emerge. It was written with the Arabic script until about 1930 when the Latin alphabet modeled on the Turkish orthography was developed. However, in 1940, as part of a russification campaign, it was replaced by an adapted version of the Cyrillic alphabet. It is written with the Arabic and Cyrillic scripts in Afghanistan, and with the Arabic script in Iran.

Since the establishment of an independent Turkmenistan in 1991, Turkmen has been written with a version of the Latin alphabet based on Turkish. It consists of 30 letters which are given below. Some letters (given in parentheses below) are used only in borrowed words.

Take a look at Article 1 of the Universal Declaration of Human Rights in Turkmen in Cyrillic and Latin scripts. .

How difficult is it to learn Turkmen?
Since Turkmen is closely related to Turkish, it should be considered a Category II language in terms of difficulty for speakers of English.