Icelandic (Islenska) belongs to the Northern group of the Germanic branch of the Indo-European language family. It is spoken mostly in Iceland, and its closest relative is another insular language, Faroese, although the two languages are not mutually intelligible because they have developed in isolation from each other. 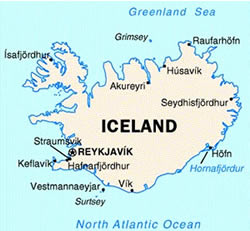 The first known settlers came to Iceland from Norway in 874 AD. They spoke a form of Old Norwegian, also known as Old Norse. After the adoption of Christianity around 1000 AD, Icelanders produced a large number of manuscripts including sagas and eddas. Between 1000 and 1400 AD, the variety of Norwegian spoken in Iceland diverged from the variety of Norwegian spoken in Scandinavia, and became known as Icelandic.

Icelandic does not have any notable dialect differences due to the fact that it is spoken on one isolated island.

The sound system of Icelandic is typical of all Germanic languages.

Icelandic has nine vowel phonemes, i.e., sounds that make a difference in word meaning. They are given below. Stressed vowels are long in monosyllabic words where the vowel is word-final, before single consonants, and before consonant clusters /pr, tr, kr, sr, pj, tj, sj, tv, kv/. Unstressed vowels are always short. In addition, Icelandic has 5 diphthongs: /ei, œi, ai, au, ou/.

Icelandic has 21 consonants. Many consonants can be either short or long. Consonant length makes a difference in word meaning

Stress in Icelandic words normally falls on the first syllable, but there are some exceptions.

Icelandic is a highly inflected language with grammatical categories typical of all Germanic languages.

Early Icelandic vocabulary was mostly based on Old Norse. The introduction of Christianity in the 11th century brought new religious terminology from other Scandinavian languages, e.g., kirkja ‘church’. Throughout its later history, Icelandic also borrowed words from other languages, such as French and German. Since the early 19th century, Iceland has been pursuing a policy of linguistic purism. This means that instead of borrowing words from other languages, new words are being coined from native elements, e.g., sími ‘telephone’, útvarp ‘radio’, bifreið ‘car’, tölva ‘computer’, flugvöllur ‘airport’.

Below are some common words and phrases in Icelandic.

Below are the numerals 1-10 in Icelandic.

The modern Icelandic alphabet has developed from one created in the 19th century by the Danish linguist Rasmus Rask and is based on a 12t- century orthography. Late 20th-century changes were the adoption of é and the abolition of z. The Icelandic alphabet is notable for its retention of two letters that no longer exist in English, namely, Ðð (th in those) and Þþ (th in math). All vowel letters, with the exception of æ and ö, can also have an acute accent, e.g., á, é, í, ó, ú.

Below is the modern Icelandic alphabet.

The Icelandic sagas are literary documents that date back to the 13th-14th centuries. They describe genealogical and family histories of Icelandic settlers in the 10th and early 11th centuries. Their authors are unknown. The most famous is Njál’s saga, Brennu-Njálssaga ‘The Story of Burnt Njal’

Edda is the name of two Icelandic books, the first a collection of poetry, mythology, and grammar by Snorri Sturluson (1178 -1241) an Icelandic historian, poet and politician. It is called the Younger or Prose Edda; and a circa 1200 collection of ancient Germanic poetry and religious tales, called the Elder, or Poetic, Edda. There are a number of theories about the origin of the word Edda, non of them conclusive.

Icelandic is a very stable language. In fact, written Icelandic has changed so little over time that Icelanders today can still read the Sagas and Eddas of Old Norse literature written more than 800 years ago with the help of modern spelling and footnotes.

Take a look at Article 1 of the Universal Declaration of Human Rights in Icelandic.

English has several words of Icelandic origin. Below are three of them.