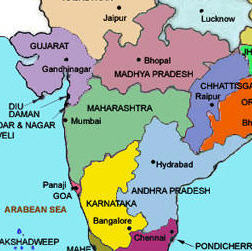 Marathi is the fourth largest language of India. Outside of India it is spoken in Israel and Mauritius (Ethnologue).

The dialect picture throughout the Marathi-speaking area is complex. Varieties that border other language areas tend to share feature with languages, such as Tamil, Kannada, and Konkani. Despite differences among the dialects in pronunciation and vocabulary, they are, for the most part, mutually intelligible. Standard Marathi is based on the speech of educated speakers of Pune, the second largest city of Maharashtra after Mumbai. Literary Marathi, based on older varieties of the language, differs significantly from spoken Marathi

Many of the phonological properties of Marathi are similar to those of Sanskrit and other Indo-Aryan languages. The use of consonant clusters is extremely limited, even in borrowed words.

Marathi has 11 vowel phonemes (depending on the analysis), i.e., sounds that distinguish word meaning. All vowels, except /ə/ can be short or long. Vowel length makes a difference in word meaning.

The consonant system of Marathi is also typical of Indo–Aryan languages.

Stress in Marathi usually falls on the initial syllable of the word.

Marathi grammar is very much like that of other Indo-Aryan languages such as Hindi, Bengali, and Punjabi. Unlike these languages, however, Marathi is agglutinative, i.e., it adds suffixes to roots to build words and to express grammatical relations. Agglutination is one of the features of Dravidian languages.

Marathi nouns are marked for the following grammatical categories:

The basic vocabulary of Marathi is Sanskrit in origin, but over the years Marathi has borrowed extensively from a number of other languages. The majority of loanwords came from Persian, Arabic and Turkish during the period of the Mughal rule, and later from Portuguese and English, e.g., baajaar from Persian bazaar ‘market’, baatata from Portuguese batata ‘potato’, khurchii ‘chair’ from Arabic kursi. In addition, Marathi has borrowed words from the neighboring Dravidian languages.

Below are a few basic phrases in Marathi script and in transliteration.

The numerals 1-10 in Marathi are given below.

The earliest evidence of written Marathi dates back to 700 AD. Marathi has a long literary history, starting with religious writings in the 12-13th centuries. The first English book was translated into Marathi in 1817, and the first Marathi newspaper appeared in 1835. Since 1950, Marathi has been written with the Devanagari alphabet which consists of 52 symbols (16 vowels and 36 consonants).

Take a look at Article 1 of the Universal Declaration of Human Rights in Marathi in Devanāgarī and in romanization.

How difficult is it to learn Marathi?
There is no data on the difficulty of Marathi for speakers of English.