The Algonquian branch was named after the Algonquin language. The terms “Algonquian”, a branch of the Algic language family, and “Algonquin”, an indigenous language spoken in Canada, need to be distinguished. The similarity in the names causes some confusion.

Today, the Algonquian branch includes 27 languages spoken in a wide region that stretches through the central part of the North American continent from the Canadian subarctic in the north to the eastern seaboard, and as far south as North Carolina.

Algonquian languages are traditionally subdivided into three groups. The table below lists the three branches and their living members (Ethnologue). 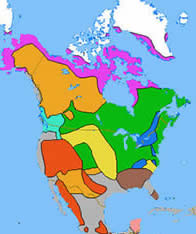 There are many differences among the sound systems of the Algonquian languages. At the same time, there are quite a few underlying similarities. Some of them are outlined below.

There is a great deal of variation among Algonquian languages with regard to the use of stress and tone. For instance, Arapaho uses tones, whereas Ojibwa uses stress.

Despite numerous differences in their structure, all Algonquian languages share certain grammatical features.

Algonquian nouns are marked for the following categories:

In many Algonquian languages verbs can function as adjectives, e.g., in Ojibwa, waabigwan, literally means ‘the flower blues’, where blues is a verb (example from Wikipedia).

Algonquian pronouns are marked for these categories:

Algonquian languages have a complex verb system. Below are some of their verb features:

Take a look at some basic words in five Algonquian languages.

Algonquian languages did not have writing systems prior to coming in contact with European missionaries in the 17th century. Since then, missionaries attempted to devise writing systems for these languages, mostly in order to translate the Bible. The earliest Bible was printed in North America in 1663 in the Massachusett language. The writing of Algonquian languages by missionaries, explorers, Indian agents, and travelers, has sometimes resulted in different spellings for place names, tribes, and individuals.

Today, all currently spoken, and some extinct Algonquian languages, have writing systems. All are written with the Roman alphabet, but there are some that are still written with specially devised syllabaries, called Canadian Aboriginal syllabic writing, or simply syllabics. Among the languages written in syllabics are Blackfoot, Cheyenne, Cree, Naskapi, and Ojibwa (in Canada). Syllabics have occasionally been used in the United States by communities that straddle the border, but are principally a Canadian phenomenon. Several Algonquian languages have active literacy programs.

Canadian syllabics were developed for writing Ojibwa in the 1830s by the missionary James Evans. Each symbol corresponds to a consonant. The script is unique among consonant-based (abugida) scripts in that vowels are indicated by the orientation of a symbol, rather than by modifications of its shape or by diacritics. It is written from left to right, with each new line directly under the previous one.

Take a look at Article 1 of the Universal Declaration of Human Rights in Micmac written in the Roman alphabet, and Swampy Cree written in syllabics.

Algonquian languages were among the first Indian languages encountered by European settlers. As a result, many names of U.S. states and cities are of Algonquian origin. Among them are Massachusetts, Connecticut, Illinois, Michigan, Wisconsin, Milwaukee, and Chicago. Incidentally, the name Chicago comes from an Algonquian word meaning ‘place of the onion,’ or ‘place of the bad smell.’ Besides place names, there are many everyday words of Algonquian origin. Below are just a few of them.