Mende (Mɛnde yia), also known as Boumpe, Hulo, Kossa, and Kosso, belongs to the Southwestern group of the Mande branch of the Niger-Congo language family. It is spoken by about 1.48 million people primarily in southern Sierra Leone and by some 20,000 people in neighboring Liberia (Ethnologue). 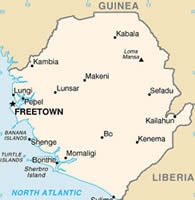 Its closest relatives are Loko, spoken in Sierra Leone, and Bandi, spoken in Liberia.

The official language of Sierra Leone is English. Mende is taught as an elective at all levels of education from primary
through the university level. It is also used in government administration and in the media. Mende is spoken as a regional lingua franca in the southwestern part of the country and is also used as a second language by many speakers of Krio, an English-based creole, which is the most widely used language in Sierra Leone for everyday communication among speakers of the country’s 14 different languages.

Mende is a tonal language with a relatively simple sound inventory. It has the following distinctive features:

Mende has 7 vowel phonemes, i.e., sounds that distinguish word meaning. Vowels may be short of long. Vowel length makes a difference in word meaning. Long vowels are usually represented in writing by double letters, but spelling is not consistent.

Mende is a tonal language. Every syllable has a pitch that is an integral part of the pronunciation of that syllable. There are four tones marked by diacritics as follows:

Mende is characterized by tonal downstep, i.e., in a high-low-high tone sequence, the second high tone is pronounced lower than the first high tone when the intervening low tone is dropped.

Some of the distinguishing features of Mende grammar are as follows:

The basic word order in Mende is Subject-Object-Verb. However, other word orders are possible. For instance, any part of the sentence can be shifted to the front for emphasis.

Mende vocabulary is similar to that of other Mande languages. New words are mostly formed through compounding, e.g., hále ‘medicine’ + mɔ ‘person’ =hále-mɔ ‘doctor’. There are many loanwords from English and from neighboring languages, e.g., bûku ‘book’, bulû ‘blue’, bûsɛ ‘bushel’, fɔtó ‘photo’.

Below are some common words in Mende.

Mende numerals 1-10 are given below.

An earlier writing system for Mende was devised by Kisimi Kamara in 1921. His orthography, called “ki-ka-ku” consisted of 195 characters representing consonant+vowel syllables written from right to left in horizontal rows. The syllabary was used for record-keeping, correspondence and even for some limited official purposes, but it was replaced in the 1940’s by a modified version of the Latin alphabet. Present-day Mende is written with a modified version of the Latin alphabet consisting of 28 letters. It is given below.

Take a look at Article 1 of the Universal Declaration of Human Rights in Mende.

How difficult is it to learn Mende?
There no data on the difficulty of Mende for speakers of English.