Igbo (Asụsụ Igbo), or Ibo , one of the largest languages of West Africa, is spoken by 18 million people in Nigeria. It belongs to the Benue-Congo group of the Niger-Congo language family. The language is thought to have originated around the 9th century AD in the area near the confluence of the Niger and Benue rivers, and then spread over a wide area of southeastern Nigeria.

Although Igbo is taught at all levels in eastern Nigerian schools, English remains the principal literary language of the country while remains a spoken and colloquial language. Reading and writing in Igbo is not very widespread. In many urban areas, Igbo is often replaced by Nigerian Pidgin English. Igbo speakers are typically bilingual in English. 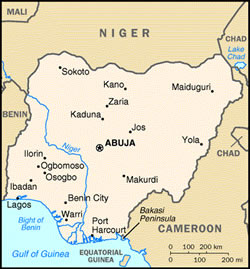 There are approximately 30 Igbo dialects, some of which are not mutually intelligible. For the most part, however, differences are lexical and phonological (Ethnologue). The large number of dialects has hindered the development of a standardized spoken and written Igbo. Standard literary Igbo, based on the Owerri and Umuahia dialects, in use since 1962, is not universally accepted by speakers of other dialects. Standard Igbo aims to include words from other Igbo dialects as well as loanwords from other languages.

The sound inventory of Standard Igbo consists of eight vowels, thirty consonants, and two tones, depending somewhat on the analysis. Igbo has only two syllable types: consonant + vowel (the most common syllable type), vowel or syllabic nasal. There are no consonant clusters and no syllable-final consonants.

Igbo features vowel harmony with two sets of vowels distinguished by pharyngeal cavity size. The latter can be described in terms of advanced tongue root (+ATR) which involves the expansion of the pharyngeal cavity by moving the base of the tongue forward, and sometimes lowering the larynx during the pronunciation of a vowel. This adds a breathy quality to the vowel. Vowels within a word harmonize with respect to the [ATR] feature, which means that all vowels in a word are produced with the root of the tongue either advanced or retracted.

The consonant system of Igbo is characterized by two notable features:

Every syllable in Igbo has a tone. There are two tones: high and low. High tone is marked with an acute accent, e.g., á, while low tone is marked with a grave accent, e.g, à. These are not normally represented in the orthography. An interesting feature of Igbo phonology is tonal downstep. For example, two adjacent high-tone syllables will normally be produced with the same pitch. However, if a low-tone syllable occurs between two high tones, then the second high tone will be produced with a lower pitch than the first one, e.g., áá will become áàá

The structure of words in Igbo is relatively simple which means that grammatical categories are not overtly marked by prefixes, infixes or suffixes.

Igbo nouns are morphologically simple and are not marked for gender, number, or case.

The principal source of word formation in Igbo is compounding, e.g., ugbo ‘vehicle’ + igwe ‘iron’ = ugwo igwe ‘locomotive’. Igbo also uses reduplication. The language has borrowed many words from English as well as from other African languages, e.g., opareto ‘operator’.

Below are some basic Igbo words and phrases.

Igbo numerals 1-10 are given below.

The first book in Igbo, Isoama-Ibo, a primer, was produced in 1857 by Samuel Ajayi Crowther, an ex-slave, teacher and linguist. Today, Igbo is written in an expanded version of the Latin alphabet. However, the wide variety of spoken dialects has made agreement about a standard orthography for the language very difficult. The current orthography which has been in use since 1962 is given below.

Take a look at article 1 of the Universal Declaration of Human Rights in Igbo.

Albert Chinụalụmọgụ Achebe is a Nigerian writer, one of the most widely read African authors. He was born in 1930s in the Igbo village of Ogidi in southeastern Nigeria. He began writing stories as a university student and gained worldwide attention in the late 1950s for his novel Things Fall Apart. His later novels include No Longer at Ease, Arrow of God, A Man of the People, and Anthills of the Savannah. (1987). Although Achebe wrote in English, he relied heavily on the Igbo oral tradition. Achebe has also published short stories, children’s books, and essay collections.