Thai (also known as Central Tai, Siamese, Standard Thai, Thaiklang) is a member of the Southwestern branch of the Tai-Kadai language family.The word thai means ‘free’ in the Thai language. Its closest relatives are Lao, Shan, and Southern Thai. Thai is spoken as a first language by 20.2 million people and by 40 million speakers as a second language in Thailand. It is also spoken in the Midway Islands, Singapore, United Arab Emirates, and the United States (Ethnologue).

The Thai people originally came from China. They moved into the Indochina peninsula some 2,000 years ago. Thai is first attested by an inscription dating back to the late 13th century AD. Initially, the Thais were dominated by the Mon and then later by the Khmer. They became independent by the mid 13th century AD. Their country then became known as Siam, and the language as Siamese. In 1939, Siam became the Kingdom of Thailand. 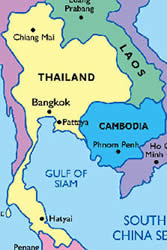 Click here on the Modern Language Association Interactive Language Map to find out where Thai is spoken in the United States.

Thai is the official national language of Thailand. It is used as a medium of instruction in schools, by the media and in all government affairs. An estimated 80% of Thaland’s population speaks Thai as their first or second language. Thai serves as a lingua franca, or language of wider communication, for speakers of the country’s 74 different languages. Most newspapers and periodicals are in Standard Thai, although there is a number of them in Chinese, English, and Malay. The Thai government promotes the use of Standard Thai.

Regional dialects
There is no universal agreement about the dialect situation in Thailand. Some scholars consider only Khorat Thai as a dialect of Thai, while others distinguish between Bangkok Thai and Central Thai.

Social dialects
There are two varieties of Thai that cut across geographical regions. They differ in vocabulary and, to some extent, in grammar.

There are twenty consonant phonemes, i.e., sounds that make a difference in word meaning. They are listed in the table below. There are no consonant clusters, and only a few consonants can occur at the end of syllables.Thai does not have a contrast between voiceless and voiced stops such as between /p/ and /b/. Instead, there is a contrast between voiceless plain (unaspirated) and aspirated stops, e.g., p – pʰ.

Thai is a tonal language in which otherwise identical words can be distinguished by five tones. The following examples are from Strecker, D. (1990). Tai Languages. In B. Comrie (ed.). The World’s Major Languages, pp. 749-775. Oxford University Press.

Linguists generally agree that stress in Thai distinguishes between otherwise identical words and that it is most prominent in final position.

Thai is an analytic language which means that it does not use inflections to represent grammatical relations, such as case, gender, number or tense.

Thai has a complex system of pronouns. The choice of pronouns in any given situation is determined by the sex, age, social position and the attitude of the speaker towards the addressee. Different pronouns are used in different situations. Below are several examples.

Verbs are not inflected for person, number, tense, aspect, or mood. These functions are determined by context or by adverbs and expressions of time.

Thai has three broad classes of particles that occur at the end of sentences.

Historically, Thai has borrowed words from Sanskrit and Pali, particularly religious terms. Chinese has also been an important source of early loans, contributing numerals and a few hundred basic terms. In the modern era, culinary and commercial vocabulary has also entered Thai from Chinese. English has also become an important source of loans, especially in the popular cultural sphere, in the mass media, and in commerce.

The most productive derivational processes in modern Thai are compounding and reduplication. Below are some examples:

Below are some basic words and phrases in Thai.

Below are Thai numerals 0-10 in romanization and in Thai script.

To listen to the pronunciation of Thai numerals click here.

The Thai script, known as the Sukhothai, was developed in the mid-13th century, shortly after the Thais gained their independence. It is probably based on the Old Khmer script. The Khmer script, a descendant of the Brahmi script of India, was one of the earliest writing systems used in Southeast Asia, dating back to the 7th century AD. It is a syllabic script in which each consonant has an implicit short /a/ vowel if it stands by itself and an implicit short vowel /o/ if it is followed by another consonant. These vowels can be suppressed or replaced by other vowels that are written before, after, above, or below the consonant. Tone markers are placed above the initial consonant of a syllable or on the last consonant of an initial consonant cluster.

Take a look at Article 1 of the Universal Declaration of Human Rights in Thai script and in romanization. There is no universal standard for romanizing Thai. Rules published by the Thai Royal Institute for romanizing Thai words, are not universally applied.

How difficult is it to learn Thai?
Thai is considered to be a Category III language in terms of difficulty for speakers of English.