Slovak (Slovenský jazyk), also called Slovakian, belongs to the West Slavic group of the Slavic branch of the Indo-European language family. It is spoken by 4.75 million people in Slovakia. There are also expatriate Slovak communities in Canada, Hungary, Poland, Romania, Serbia and Montenegro, Ukraine, and USA. 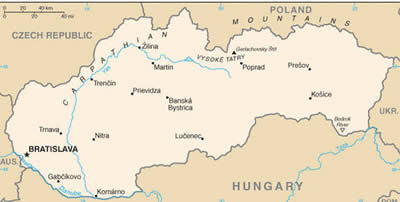 The total number of Slovak speakers worldwide is 5.2 million (Ethnologue). Slovak is close to Czech, and Slovak speakers in the western part of Slovakia and Czech speakers are able to understand each other. All Slovaks are able to understand Standard Czech thanks to the media. However, with the breakup of Czechoslovakia in 1993, the two languages have begun to drift apart with the differences between Czech and Slovak being primarily lexical and phonological.

Slovak is the official language of the Slovak Republic. Standard Slovak is used in government administration, all levels of education, and in all media.

Slovak dialects are fragmented by the country’s mountainous terrain, however, they are mutually intelligible. Slovak is usually divided into three major dialect areas:

Slovak has five vowel phonemes, i.e., sounds that differentiate word meaning. All vowels can be long or short. Vowel length makes a difference in the meaning of words.In the table below, vowel length is indicated by a colon.

The consonant system of Slovak has the following general features:

Stress always falls on the first syllable of a word.

Slovak is a highly inflected synthetic language with a grammar that is very similar to that of other Slavic languages. Grammatical categories are expressed by adding synthetic inflections to the stems of nouns, adjectives, verbs, and most pronouns. All native Slovak stems, as well as most borrowings from other languages, are inflected.

Slovak nouns are marked for gender, number, and case. The three categories are fused into one ending, as is the case in all Slavic languages.

Most Slovak vocabulary is derived from Proto-Slavic roots, shared by all Slavic languages. In addition, Slovak has been influenced by a number of languages, especially Old Church Slavonic, introduced into the area by St. Cyril and St. Methodius in the 9th century, as well as by Latin, neighboring Hungarian, and most recently by English.

Here are a few common phrases in Slovak.

Below are Slovak numerals 1-10.

The modern Slovak alphabet consists of 46 letters. It is given below.

Take a look at Article 1 of the Universal Declaration of Human Rights in Slovak and compare it to Czech to see the close similarities between the two languages.