Éwé (Ɛʋɛ̀gbe) is a member of the Atlantic-Congo branch of the Niger-Congo language family spoken in southeast Ghana and Togo. It has several alternative names: Ebwe, Efe, Ehwe, Eibe, Eue, Eve, Gbe, Krepe, Krepi, Popo and Vhe. It is part of the Gbe group of languages that also includes Fon spoken in Benin and southwestern Nigeria, Gen spoken in Togo and Benin, and 13 varieties of Gbe spoken in Benin (Ethnologue). 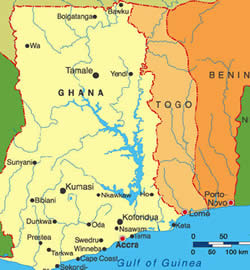 Éwé to different locations: Oyo state in Nigeria, Tado and Notse in Togo, and Ketu, now a Yoruba town in Benin. According to Éwé legends, Ketu was the original homeland of the Gbe-speaking people.

Éwé has three distinguishable dialects. Most of the differences among the dialects have to do with phonology. All dialects are mutually intelligible. The written language is based on Aŋlo spoken along the coast between the mouth of the Volta River and Lomé.

Éwé syllables typically consist of a vowel or a consonant + vowel. There are no consonant clusters.

According to Éwé Basic Course, the language has lexical tones. Lexical tone is the distinctive pitch level carried by the syllable of a word which is an essential feature of the meaning of that word. There are three lexical tones:

Éwé is an isolating language which means that most grammatical relations are marked by word order or by particles. Most of the roots consist of one syllable (consonant + vowel). There are very few inflections.

Éwé verb morphology is slightly more complex than the morphology of nouns.

There are a number of sentence-final speech act particles that indicate the illocutionary force or the speaker’s attitude toward an utterance.

The basic word order in Éwé is Subject-Verb-Object. Subjects and objects are mostly marked by word order.

Below are a few common phrases in Éwé.

Éwé is written in the African reference alphabet, first proposed by a UNESCO-organized conference in 1978. It is a version of the Latin alphabet adapted to represent Éwé sounds. Some sounds are represented by two-letter sequences, e.g., dz, ts, gb, kp, ny. There are also additional letters borrowed from the International Phonetic Alphabet (IPA), e.g., đ, ŋ, ɔ. Tone is not marked in writing, except to disambiguate otherwise identical words. A tilde is used to mark nasalization, e.g., ã.

Take a look at Article 1 of the Universal Declaration of Human Rights in Éwé.

How difficult is it to learn Éwé?
There is no data on the difficulty of Éwé for speakers of English.