Kabyle (Taqbaylit) belongs to the Northern Berber group of the Afro-Asiatic language family. The name of the language is reportedly derived from the Arabic word for “tribesman”. The Kabyle-speaking areas of Algeria include the provinces of Tizi Ouzou, Béjaïa and Bouïra. 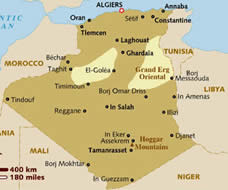 About half of the population of the neighboring Sétif, Bordj Bou Arréridj and Boumerdès provinces are also Kabyle speakers. About half of the 3-million population of Algiers, the capital of Algeria, are also Kabyle-speaking. In addition, Kabyle is spoken in diaspora communities in Europe, mostly by about a million people in France. Ethnologue estimates the total number of speakers of Kabyle worldwide at 5.6 million, while INALCO estimates it at 7 million.

According to Ethnologue, there are 5 million speakers of Kabyle in Algeria, although Modern Standard Arabic is specified in its constitution as the official language of Algeria, Kabyle has been taught in schools in Kabyle-speaking areas. However, it remains primarily the language of the home and the marketplace. Many Kabyle speakers also speak Arabic and French.

There are several geographically distributed and mutually intelligible dialects of Kabyle.

The sound system of Kabyle shares many features with other Berber languages.

*/e/ is primarily used as an epenthetic (inserted) vowel. Consonants Kabyle has an extremely rich consonant system. Some of the system’s distinguishing features are listed below:

The grammar of Kabyle shares most of its basic features with other Berber languages.

Kabyle nouns are marked for the following categories:

Kabyle verbs agree with their subjects in person, gender and number.

Below are a few basic words and phrases in Kabyle.

Below are Kabyle numerals 1-10.

Although Kabyle was a written language before the 7th century, it was rarely written until the 20th century.

The modified Latin alphabet for Kabyle is given below:

Take a look at Article 1 of the Universal Declaration of Human Rights in Kabyle.

How difficult is it to learn Kabyle? There is no data on the difficulty of Kabyle for speakers of English.
Top

OLAC Resources in and about the Kabyle Language