The Baltic branch of the Indo-European language family consists of a group of related languages that were spoken mainly in areas to the east and southeast of the Baltic Sea in Northern Europe. All Baltic languages are thought to have evolved from a common ancestral Proto-Baltic which itself is thought to have split from a common Proto-Balto-Slavic.

The Baltic languages are of particular interest to linguists because they retain many archaic features that are believed to have been present in the early stages of the Proto-Indo-European, the hypothetical ancestor of all Indo-European languages. It is believed that the Baltic peoples resisted Christianization longer than any other Europeans, thus delaying the introduction of writing and isolating their languages from outside influences. Of the two languages, Lithuanian is the more conservative, having retained more archaic grammatical forms than Latvian, especially in its sound system and noun morphology. These features have been attested only in extinct Indo-European languages.

The Baltic branch is sometimes divided into two sub-groups: 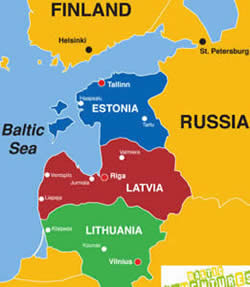 Despite their small size, both Latvian and Lithuanian have several distinct dialects:

The sound systems of Latvian and Lithuanian share some common features:

Gender, number and case are conflated into one ending.

Person, number and tense are conflated into one ending.

Below are numerals 1-10 in Latvian and Lithuanian.

Baltic peoples resisted Christianization longer than any other Europeans, which delayed the introduction of writing and isolated their languages from outside influences. As a result, Latvian appeared in a hymnal only in 1530 and in a printed Catechism in 1585. Lithuanian was first attested in a hymnal translation only in 1545, and the first printed book in Lithuanian was published in 1547.

Lithuanian was mostly an oral vernacular during the years of the Polish-Lithuanian Commonwealth (1569-1795). All official documents were written in Latin, Polish, or Belarusian. After the 18th-century Partitions of Poland by Prussia, Russia, and Habsburg Austria, most of the Baltic lands came under the rule of the Russian Empire, where the native languages were sometimes prohibited from being written.

Today, both Latvian and Lithuanian are written with adapted versions of the Latin alphabet. Both alphabets use diacritics instead of digraphs.

Below is Article 1 of the Universal Declaration of Human Rights in Latvian and Lithuanian.