Kurdish (Kurdi, Курди) belongs to the Indo-Iranian branch of the Indo-European language family. It is believed that the first Indo-European-speaking people began to move into what is present-day Kurdistan about 4,000 years ago. In the next two thousand years, the original language of the Kurds was completely displaced by an Indo-European variety that eventually became Kurdish as it is spoken today. Kurdish is a macrolanguage that consists of a continuum of closely related languages spoken over a large territory that encompasses Turkey, Kurdistan, Iran, Syria, Iraq, Iran, Armenia, Georgia, and Azerbaijan with a large diaspora spread all over Europe and the United States. 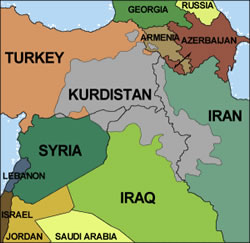 The distinction between language and dialect within Kurdish is problematic and is based on a variety of criteria, not all of them linguistic. The Kurdish Academy of Language divides the Kurdish languages/dialects into three major groups that do not include a number of other languages/dialects thought to belong to the Kurdish macrolanguage. Each of these major dialects, in turn, can be broken up into a number of smaller varieties. Ethnologue breaks up Kurdish into three large groups:

The description of Kurdish phonology given below is based on Central Kurdish considered to be the standard.

Below is a chart of the consonant phonemes of Central Kurdish. Phonemes are sounds that differentiate word meaning. Phonemes given in parentheses occur only in loanwords.

Like other Iranian languages, Kurdish is an inflected language, i.e., it adds prefixes and suffixes to roots to express grammatical relations and to form words.

Kurdish verbs agree with their subjects in person and number. They have the following major characteristics:

The normal word order in Kurdish is Subject-Object-Verb. Modifiers follow the nouns they modify.

Kurdish shares most of its vocabulary with other Indo-Iranian languages. However, because Kurdish is spoken in many countries, in each of these countries its speakers have experienced different linguistic and cultural influences. For instance, Iraqi and Syrian Kurds, brought up in an Arabic educational system, have adopted a significant number of Arabic words. Kurds in Turkey have borrowed words from Turkish; Kurds in Iran have assimilated Persian vocabulary; and Kurds in Armenia have borrowed words from Armenian and Russian. Most recently, English has become a source of borrowing, mainly in the areas of science, technology, politics, and the military.

Below are some basic Kurdish words and phrases. A circumflex accent represents vowel length, the letter c represents the sound [ch] as in chap.

Below are Kurdish numerals 1-10.

For much of their history, the Kurdish literature was written in Arabic, Persian or Turkish, although Kurdish, written in the Perso-Arabic script, began to appear in writing in the 7th century AD. At present, Kurdish is written in three different writing systems:

Attempts are presently being made to create a standardized Unified Kurdish alphabet with a one-to-one correspondence between letters and phonemes, i.e., sounds that make a difference in word meaning. However, implementing a standardized literary language and orthography is a daunting task for a language spoken in so many different countries.

Take a look at Article 1 of the Universal Declaration of Human Rights in Kurdish.

A Kurdish word is often used in international news and is rapidly becoming familiar to most Americans.