Bosnian, босански (bosanski) belongs to the South Slavic group of the Slavic branch of the Indo-European language family. After the breakup of Yugoslavia, Serbo-Croatian, defined as the common language of Serbs, Croats, Bosniaks and Montenegrins, officially split into three mutually intelligible languages — Bosnian, Croatian and Serbian. These languages are based largely on political, rather than linguistic considerations. Although Serbian, Croatian and Bosnian differ in a number of ways, these differences do not affect their mutual intelligibility due to the fact that they share a common sound system, grammar, and vocabulary. 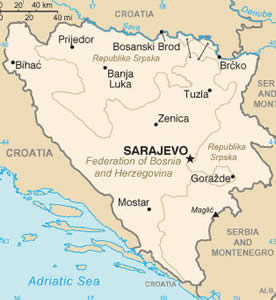 Standard Bosnian, based on the Shtokavian dialect Ijekavian pronunciation, is the official language of Bosnia and Hercegovina. It is spoken by approximately 2 million people in Bosnia. It is also spoken in Serbia, Croatia, and Montenegro (Ethnologue). Standardization of Bosnian has not been completed due to disagreement among specialists about the features that make Bosnian uniquely distinct from Serbian and Croatian.

The dialect picture for Bosnian, as well as for Serbian, and Croatian, is quite complex and is shared by all these languages. The major dialectal difference is based on the pronunciation of the initial consonant in the word for ‘what.’

Shtokavian, in turn, has three varieties, based on three different present-day pronunciations of the vowels that replaced the Common Slavic long vowel [æ], known as jat’.

Bosnian has 25 consonant phonemes, i.e., sounds that differentiate word meaning. The consonants of Bosnian are given in the table below.

Like all Slavic languages, Bosnian allows a variety of consonant clusters. These are all voiced or all voiceless. The last consonant in the cluster determines whether the entire cluster is voiced or voiceless. This rule does not apply to nasals, laterals, or rhotics. The consonant /r/ can be syllable-forming, e.g., drvo ‘tree.’

Bosnian nouns are marked for gender, number, and case. Case indicates the function of a noun and its relationship to other words in the sentence.It can also indicate pragmatic relationships. The three are fused into one ending, as is the case in all Slavic languages.

The basic vocabulary of Bosnian is Slavic in nature. The differences between Bosnian, on the one hand, and Serbian and Croatian, on the other, occur mostly in the lexicon. Croatian has preserved more native Slavic words, while Serbian has borrowed more from Russian and Western European languages. Bosnian is more like Croatian, except for the fact that it has a large number of loanwords from Arabic, Turkish, and Persian loanwords due to the Bosniaks’ religious affiliation with Islam.

Below are some common phrases in Bosnian.

Listen » Some basic phrases in Bosnian

Below are the numerals 1-10 in Bosnian.

The original alphabet used by both the Serbs and Croats was Glagolitic. It was created by the monks Cyril and Methodius in the 9th century for Old Church Slavonic, the liturgical language of the Eastern Orthodox Church. In the Orthodox areas of Serbia and Bosnia, Glagolitic was replaced by the Cyrillic alphabet in the 12th century.

Today, Bosniaks and Croats in Bosnia and Herzegovina prefer the Latin alphabet, while Cyrillic is preferred by Bosnian Serbs. The two alphabets are given below.

Take a look at Article 1 of the Universal Declaration of Human Rights in Bosnian Latin script.