Zulu (isiZulu) is a southern Bantoid language spoken in the KwaZulu-Natal Province in South Africa (formerly called Zululand). The Zulu people are thought to have migrated to this area along the east coast of Africa and through central Africa before the 16th century. When they came into contact with Khoisan-speaking people, the Zulus adopted some of the vocabulary, and the click consonants of the Khoisan languages. The first grammar of Zulu was published In 1859.

Zulu is closely related to Xhosa, Swati, and Ndebele. The three are mutually intelligible but are considered to be separate languages for political and cultural reasons. In fact, Zulu and Xhosa are similar enough linguistically to be considered dialects of one language, but the Zulu and Xhosa people consider themselves to be different people who speak different languages. 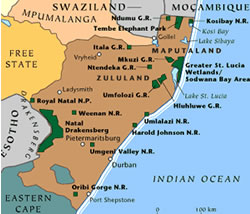 Zulu, is one of the 11 official languages of the Republic of South Africa where it is spoken by 11.7 6 million speakers as a first language and by an estimated 15.7 million speakers as a second language. Zulu is also spoken in Swaziland, Botswana, Lesotho, Malawi, and Mozambique. The population total for all countries is estimated at 27.7 million people (Ethnologue). Since Zulu is easily understood by speakers of Xhosa, Swati and Ndebele it is used as a lingua franca from Natal to Zimbabwe, often in its pidginized form called Fanagalo, a trade language that is widely used in towns and mining areas of South Africa.

The status of Zulu, like all other African languages in the Republic of South Africa, is complex. Zulu is used in primary schools up to the second grade and is studied as a subject in both primary and secondary schools up to the tenth grade. At the secondary level, instruction in schools serving Zulu-speaking students is in English. All education at the university level is in English or Afrikaans.

There has been a steady growth of Zulu publications since 1930. The South African Broadcasting Corporation has domestic television and radio in Zulu. A number of newspapers and magazines are published in either Zulu, or in a combination of Zulu and English.

The phonology of Zulu is characterized by a simple vowel inventory and a complex system of consonants. Most syllables end in a vowel, and there are no consonant clusters.

There are five vowel phonemes, i.e., sounds that distinguish word meaning. Vowels can be either short or long. Although vowel length distinguishes word meaning, length is not represented in writing, except for â and ä.

Zulu has a complex system of consonants, including some uncommon ones.

1. Clicks
Clicks are stops produced with two points of contact in the mouth: one forward and one in the back. The pocket of air produced by the resulting enclosure is rarefied by the sucking action of the tongue. Release of the forward closure results in a pop-like sound. There are five places of articulation at which click consonants occur. In the International Phonetic Alphabet, clicks are represented by placing the assigned symbol for the place of click articulation to the left of a symbol for a non-click sound at the same place of articulation.

Zulu has the following click consonants which can be modified in a variety of ways, such as aspirated, breathy-voiced or nasalized.

4. Ejective
Ejective consonants are pronounced with simultaneous closure of the glottis, raising air pressure in the mouth, so that when the sound is released, there is a noticeable burst of air accompanying the release. They are marked with an apostrophe /’/.

Below is a table of Xhosa consonants. The red letters are orthographic representations of the sounds. The inventory is taken from Wikipedia.

Zulu is an agglutinative language, i.e., grammatical functions are expressed by adding prefixes and suffixes to stems.

Zulu verbs are highly inflected. Verbs consist of a root plus prefixes and suffixes that represent different verbal categories such as subject and object agreement, tense, causation, reciprocity, negation, and aspect. They appear in fixed order, much like in Xhosa.

The normal word order in Zulu is Verb-Object (the subject is part of the verb compound). Adjectives, possessive pronouns and demonstratives come after the noun they modify.

Zulu, Xhosa, Ndelebele and Swati share most of the basic vocabulary and grammar. Like other Southern Bantu languages, Zulu has borrowed words from the Khoisan languages, and from English and Afrikaans. Compare these equivalents of ‘What’s your name?’ in these four languages:

Below are a few common words and phrases in Zulu.

Take a look at Article 1 of the Universal Declaration of Human Rights in Zulu.

How difficult is it to learn Zulu?
Zulu is a Category II language in terms of difficulty for speakers of English.